Music to Game By 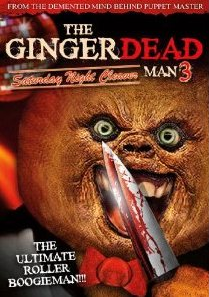 It seemed like an ordinary night at the Scientific Research Institute of Homicidal Baked Goods. Well, except for how FBI agent Clarissa Darling visited to try questioning the Gingerdead Man, who is freed when confused animal rights activists arrive under the mistaken assumption they’re animal test subjects. While making his escape, the Gingerdead Man stumbles across a time machine and winds up getting stuck in 1976. When the edible evil one stalks a roller boogie rink, only one person can stop him: the rink owner’s telekinetic niece Cherry. And it only gets weirder from there…

The Gingerdead Man 3: Saturday Night Cleaver (originally promoted as Gingerdead Man 3: Roller Boogieman) is an oddball comedy that features one of the most bizarre endings I’ve ever seen. As you’ve no doubt deduced from my brief synopsis, large chunks of the film are parodies of either Silence of the Lambs and Carrie (depending on the scene), with one segment referencing the shower scene from Porky’s. Sometimes they play out almost exactly like the original (save for a few comedic alterations) and other times offer a much broader parody of the original events. Although I didn’t laugh at everything, the inmates at the Scientific Research Institute of Homicidal Baked Goods are a hoot, as are the threesome scene and how the Ginderdead Man talks like Hannibal Lecter whenever he’s in the presence of Clarissa Darling. The Gingerdead Man is probably the only Full Moon creation whose cheesy puppet effects actually work in favor of the movie’s overall feel. Also adding to the humor is John Carl Buechler’s voicing of the titular character, replacing John Vulich from the previous film (who in turn replaced Gary Busey). I should also note that one scene from the film features winners of a Full Moon contest, not unlike a certain promotion Full Moon offered a few years back.

In addition to the beautiful widescreen transfer, the Pre-Release Fan Edition also includes a nice little selection of trailers for films like Killjoy 3, Puppet Master: Axis of Evil, Evil Bong II: King Bong, The Gingerdead Man 2, Dangerous Worry Dolls and The Gingerdead Man 3. All of which are widescreen and great quality, as one would expect given their (fairly) recently made nature. I should note that the and trailers are the exact same ones from the Killjoy 3 and Puppet Master DVDs. Sadly, there is no “Play All” option. Although there are chapter stops, there’s no chapter selection menu! Full Moon seriously needs to knock off this “streamlining” stuff. NOW.

I have to admit, that little psychopathic pastry grew on me and I can easily say that it’s worth a rental if you’re in the right mood. I’m hoping to check out the rest of the series sometime, especially the previous film in the series. Why? Because it has the Gingerdead Man wreaking havoc at a thinly-disguised parody of Full Moon Features!

Bad Behavior has blocked 1649 access attempts in the last 7 days.