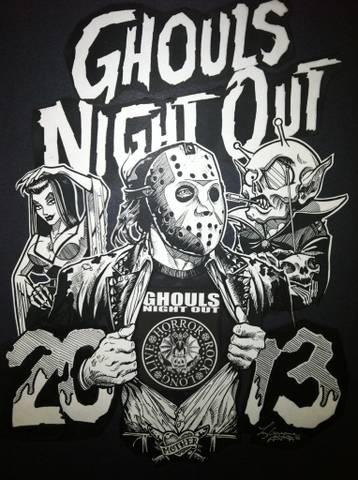 One of the oldest horror-punk (and general horror-themed music festivals) around, the Ghoul’s Night Out festival slashes its way into 2013 with a killer line-up this time around. Taking place on the weekend of July 19-20, 2013 at Dingbatz, in Clifton, NJ, the two day event will feature a plethora of bands.

*note: this does not represent the order in which bands will appear*

A lot of black and leather will be in New Jersey that July weekend. It’s good to see Lugosi’s Morphine playing again, which is as amazing as DieMonsterDie making their first east coast appearance EVER. The Reanimated is a band that hasn’t gotten as much respect as I think they deserve. So I’m glad they’re appearing. Bad Whoremoans will be playing, which is killer. Kitty In A Casket brings the psychobilly from Austria. Plus, though Blitzkid broke up, frontman Argyle Goolsby will be there.  A lot of heavy, a lot of punk, a lot of great music.

Tickets are reasonable for the sheer amount of music. From the official GNO facebook event page:

Ticket presale will go live on Friday at 9am (3/1/13) for Ghouls Night Out Fest ’13. You will be able to purchase single day tickets (sat or sun) for $35, or combo tickets which will be $50 and good for admission to both days of the show. Tickets are limited to 200. Get em while they’re available online from ghoulsnightoutfest.bigcartel.com starting Friday March 1st 2013 at 9am.