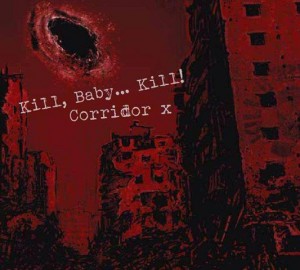 Buy at Deep Eddy and on Amazon / iTunes

I had the pleasure of catching Kill, Baby…Kill when they played on their last 2012 tour, the band having expanded on its Sometimes They Come Back! EP to incorporate music that would comprise the 2013 release, Corridor X. The show was one of the best, with some of the fiercest playing on view. They played both for the audience and at the world, almost competing against the din of existence for attention. There was a severity in the band’s performance and it made me wonder if it could ever be captured beyond the live experience. Amazingly, Kill, Baby…Kill managed to distill the intensity of their live performance into a record without losing a single heart-pounding beat.

Corridor X builds upon the bands first EP, reimagining the songs of Sometimes They Come Back! to more accurately reflect the sound of the band after both a lineup change as well as a change in attitude. The band is more focused on this outing and more comfortable in its own identity. Instead of repackaging a previous release with a few additional originals, this is a reinvention of the band. There’s a sinister edge to the music. It’s more sinister. It’s powerful, and yes, one of the few instances where a band is able to catch the lightning of their life performance in a bottle.

Corridor X is the sound of a headfirst freefall into darkness. It’s an album of high velocity. It’s an album of terminal attitude. It’s the music of a one way trip, of driving until the tank is empty with no intention of looking back. The title invokes the greatest fear, that of the unknown, placing it as a destination. One doesn’t proceed down Corridor X lightly, especially since it’s named after a dismal stretch of highway from the band’s native Alabama:

“Corridor X is the begining stretch of the path from Birmingham, AL to Memphis, TN. It is a seemingly endless stretch of highway that has very little development. So if you break down, there could be an impossible distance to the next exit that has any sort of gas station.”

Among the songs Included in Corridor X (like the dreadful “Something On The Wing” or the panic-inspiring “Meltdown in Sector 9”) is “Ant Invasion,” a cover from Shadowy Men On A Shadowy Planet, the latter of which once famously included the song “We’re Not A Fucking Surf Band” on their last release. It’s a fitting inclusion, not just to showcase KBK’s interpretation on a classic but also to reaffirm that the band is not beholden to surf-instrumental conventions. When describing themselves as ‘apocalyptic surf punk,’ it’s clear they’re not going to be busting out your grandmother’s version of “Telstar.”

Oddly enough, it seems that there are an equal amount of bands eschewing the conventional attitudes /arrangements of classic surf music to those who adhere, to where it might appear that bands ‘deviating’ from the norm ARE the norm. There are well-established acts who balance themselves between the sounds established in the 60’s and the modern advances of today, while other bands have no qualms disregarding the balance to go off on their own tangents. Kill, Baby…Kill won’t be confused for the uniformed bands from the heyday of surf, but if anything, Corridor X confirms that’s not who KBK are.

KBK are a band of many interests and influences and Corridor X might read as a declaration of a Mission Statement for the band. I think the remaking of the prior songs in this band’s new image is meant to say that they respect who they once were and the bands whose work laid the foundation for where they currently stand, but Kill, Baby…Kill is a band focused on progressing forward. If Corridor X is indicative of what’s to come, we should all be happy to go along for the ride.

Author’s Note: Hours after this piece was written, news broke that famed author Richard Matheson passed away. Known for writing the novels I Am Legend, What Dreams May Come, Stir Of Echos, among with numerous episodes of The Twilight Zone, including “Nightmare at 20,000 Feet.” Kill, Baby…Kill’s song “Something on the Wing” draws from that original episode, one that has become synonymous with the series (as well as a staple of American pop culture.) We wish to extend our condolences to the family of Richard Matheson and our gratitude for his contribution to the strange, the wonderful and the weird.

Bad Behavior has blocked 571 access attempts in the last 7 days.