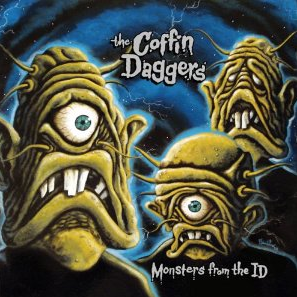 New York 1999. While Y2K was weighing heavily on many peoples’ minds, Viktor Venom (aka Victor Dominicis) was thinking about music. Having previously preformed as a part of Reagan Youth, Chaos UK and Nausea, Venom was no stranger to punk rock. However, he wanted to combine that sound with his other influences like surf and psychedelic music (among many others) and as a result, the Coffin Daggers were born. Although there have been some lineup changes over the course of the group’s many years of existence, the members performing on the subject of today’s review are:

But no matter which “version” of the Coffin Daggers you hear, you’re surely in for a great time. If their 2002 self-titled debut release and two singles, aren’t enough proof for you, let’s take a look at their most recent outing, Monsters from the ID.

“Coffin Dagger” kicks things off with a reverb heavy intro followed by some great drums and guitar work coupled with an organ. This unique mix of surf and punk sets the tone for rest of the album, with the tolling sea bell at the end really brings home the surf feel. “Shark Attack” is somewhat lighter in feel thanks to the constant organ work while “Borgo Pass” cranks up the theremin to create laserlike sounds. The title track, “Monsters From the Id,” is slow and plodding. However, that is NOT a complaint. Its slow pace nicely compliments the creepy organ work and reverb variations. The album’s first cover song, a take on Henry Mancini’s “A Shot In the Dark” starts with an undercover feel then really cranks up the rock (and cool drum grooves). Similarly, “The Heinous Mr. Hyde” uses its heavier rock feel to create a sense of menace. So much so that you can practically see Mr. Hyde stalking around London when you listen to it. Even the light organ work doesn’t alleviate the overall heavy feel.

“Haunted Pad” is the band’s excellent take on Ted Taylor’s “Haunted House,” that’s surprisingly more happy than creepy (theremin opening aside). The fast and heavy opening of “Something Wicked This Way Comes” sets pace for the rest of the track while both “Parasite” and “Evil Eye” have a great classic 60’s feel. The sneaking feel of their take on George Barnes’ “Spooky” is nicely aided by the peppy drumbeat and great guitar work. “Smoke” is very slow and moody and, thanks to its subdued instrumentation, lives up to its name by making the listener thing of wafting puffs of smoke. But don’t get too relaxed, as “But First…The Tranya!” fast, circuslike feel to it. The final track is the Coffin Daggers’ take on “Caravan.” Although best known due to Duke Ellington’s performance of it, “Caravan” has also been covered by exotica greats such as Martin Denny and Arthur Lyman. Although you you really do have to hear it in order to truly appreciate it, I will say this: I loved beatnik-style opening buildup and it sounds like something you’d hear on a diner’s jukebox in an old monster movie.

I find it quite interesting how some tracks are pure surf while others take it in other musical directions while using surf as a jumping off point. And why shouldn’t they? It keeps things from getting monotonous and lets the Coffin Daggers explore many styles without giving the listeners musical whiplash. Speaking of interesting, it’s also worth noting that part of the album’s distinctive sound is due to it being recorded and mixed in analog rather than digital! I think it adds to the “old school” feel without forcing the band to stick to throwback-style compositions. Yes sir, there’s a lot to love about this album (and the Coffin Daggers themselves). Here’s hoping they have even more great music in the works!

Special thanks to the Coffin Daggers for use of the image!

Bad Behavior has blocked 854 access attempts in the last 7 days.