It’s easy to look back on the year and reminisce on all the wonderful, proud moments in horror.  But there sure were a lot of questionable and downright mucky things going on in the genre as well. Despite our best efforts to forget them, these thirteen examples should be remembered so we know to forever stay away from them.  Producers and creators should take notice to avoid these horror blunders in 2014! 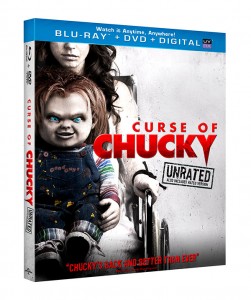 Has the franchise been dwindling over the past few installments?  Yes.  Does that mean this 80s and 90s horror icon has hit its peak and its only future is a slow, straight to video decay a la the Tremors series or From Dusk Till Dawn sequels?  Hope not.

It may turn out to be a positive move for the series, as Curse of Chucky broke low expectations and garnered support that may not have been possible in a full-scale theatrical release.  However, more mainstream fans may have indeed appreciated the film’s return to the originals’ themes and scares—making its nontheatrical release a potential financial misstep.

Regardless, it’s a big blow for the genre should the trend continue.

2.  No Saw movie released this year

Another year another lonely Halloween without a Saw movie to cuddle up to.  It’s been over three years now and many fans of the series were hoping Lionsgate would reboot the franchise in time for a 2013 release.

Rumor has it the studio is actually currently working on a reintroduction of the series, but there hasn’t been an official announcement from them yet as of this writing.  Hopefully whatever fresh facelift Saw is given will still appeal to the masses and be released in the near future.

So don’t put away your Jigsaw costume and mini tricycle just yet.  Watch this to hold you over in the meantime.
3.  The return of the Governor on The Walking Dead 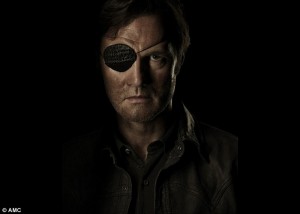 Rick really needs to add “eliminating your enemies for good” to his list of learned leadership lessons and get rid of this guy once and for all.  An entire season was devoted to the Woodbury story arch and reintroducing the Gov in season 4 really made his presence feel like an overstayed welcome.  There’s plenty of interesting character development and drama occurring amongst the remaining cast, and new plot points, such as the infectious prison disease, to mix it up as is.

What’s worse, the writers of the show tried to humanize the Gov in his return, as if the viewer is supposed to sympathize with him.  Did they think everyone would just forget about all the murder, floating heads, sexual assault, and everything else that occurred at the behest of the Governor, and a couple of episodes would make it ok?

One thing that’s nice about the comic is it doesn’t really try to soften the maniacal villain the way the show has.  He’s just a crazy dude who deserves to be dead and dealt with.  If the show was so dead set on keeping him, they should have brought him back as a surprise several seasons down the road, as that would have made a bigger splash.

Note:  Despite the awesome midseason finale, we still stand by this one.  This is the ending to season 3 that should have happened.

See #2 above.  Like the Saw series, not everyone is a fan of the Final Destination franchise or at least the many iterations that we’ve gotten over the years.  But they still have become a staple franchise for a new generation of horror fans who didn’t grow up with the likes of the Friday the 13th or Nightmare on Elm Street series.

And despite their ridiculous violence, you have to give them credit for drawing on the fear that comes from everyday situations that people try and ignore.  We’ve already got theme park rides, race tracks, airplanes, highway accidents—all experiences with inherent risk, but the chances are so low people brush them off.  What if they came true?  Every time a Final Destination installment comes out you almost can’t resist knowing what new fear the violent premonition will focus on.

It’d be nice to get a new, unique approach to the series.  Thankfully, one may be in the works as of this writing, according to the movie’s Wiki page, with filming set to happen sometime in 2013.  Better get moving Final Destination, it’s almost the new year! 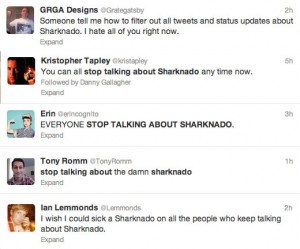 Movies like Sharknado are for those who like movies that are so bad, they’re good.  They are mindless, tasteless, and obscure—all perfect ingredients for B-horror bliss.  They have their place.

But the fact that everyone has hopped on the bandwagon and likes them (but doesn’t really…it’s just the cool thing at the moment) kind of makes them a little less special.  The popularity of Sharknado is like that episode of Doug where everyone starts wearing his outfit and all of a sudden it becomes cool.  Even though he’s been wearing it every day the whole time.

The frustrating part is some supposed “fans” don’t even know about Sharktopus, Dinoshark, and the like.  And they’ll soon forget about Sharknado as well—leaving it to be enjoyed by the true fans who actually care.

There’s a reason these movies aren’t for the mainstream audience.  Let’s keep it that way.

No matter how many times you try to rework it and no matter what bells and whistles you put on it, no new rendition is going to hold a candle to the original Texas Chainsaw Massacre.  You simply can’t match the grittiness, the lure, the panic, and the hopelessness of the first.  Unfortunately, Texas Chainsaw ignored this, and came out as an overconfident, prancing mess.

Gimmicky, downright comical, and full of attempts to make you actually like the crazed serial killer, this year’s reboot would be the recipient of a well-deserved slap across the (leather) face if the original could travel to the future and do so.

Do yourself a favor and pass on this one.

A clever concept quickly becomes as elementary as its title.  Imagine, if you will, 26 vignettes that portray 26 different deaths based on a different letter in the alphabet.  That’s pretty much what you have with The ABCs of Death.  The only problem is that it’s incredibly uneven.

Some of the deaths are hit-or-miss while others cater to the lowest common denominator, lacking the fundamentals of basic horror including, for one, a decent set-up on any of these.  It feels more like a YouTube playlist and, somehow, fails to really measure up to it.

It’s hard to say just why ABC is bad other than by virtue of being a human being who knows what it wouldn’t want.

Dead Space 3 was neither a highpoint for the franchise nor the genre of horror as a whole.  With survival horror games like the original Dead Space, for example, the frightening experience is accomplished through dynamic use of sound, lighting, music and imagery – all put toward an overwhelming atmosphere. Unfortunately, Dead Space 3 introduced co-op gameplay which greatly diminished the effect and the ambiance. 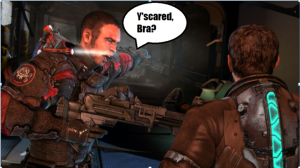 Imagine trying to watch a tense scene while your partner talks to you on the headset about getting high and you pretty much have the idea.  That’s not to say that Dead Space 3 failed entirely at delivering on an experience, just that it wasn’t scary.  Previous entries in the series attained the horrific atmosphere by isolating the player—making you feel alone—and you just don’t get that with the third installment, playing it the way it was meant to be played. 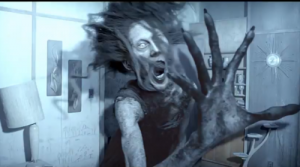 Oh CGI.  How you’ve ruined so many movies that could have been good.

Forget the mountain of plot holes and unanswered questions in Mama.  Where this one really fell apart was in the CGI.  See, you spend the majority of the movie getting small glimpses and mere hints at what the Mama character is and how it moves.  But you’re never quite sure.  Your imagination has to fill in the blanks, creating a sense of discomfort and eeriness.  Then, just like countless movies since Boogeyman, everything falls apart in the climax when the character is finally revealed in all its CGI glory.

This isn’t like Jaws, where the big reveal is actually quite real and terrifying, thanks to practical effects.  If you want to be scared by Mama, watch the motion test as demonstrated by the lanky, talented Javier Botet.  Had they used him the way they did in the test, instead of a goofy, floaty, poorly rendered version, then the villain would have been much more grounded and real (i.e.  scary).

While on one hand we have CGI hurting the likes of Mama, on the other hand we have low budget practical effects conspiring against an otherwise pretty great VHS2, the sequel to last year’s horror anthology, VHS. 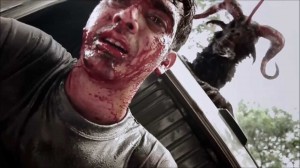 In particular, arguably the best short in the anthology, “Safe Haven,” was tainted by a minotaur-like demon in its last act.  It wasn’t the fact that the demon was there, as it made sense to the plot.  It was how the creature was revealed:  first from afar as an imposing almost inescapable foe, then close up, revealing a silly, costume shop quality abomination.  Once seen up close, all the tension, creepiness, and credibility that had been set up by the first and second acts is quickly rejected.

But wait.  Then it speaks… and you’re left uncomfortably trying to decide if you are meant to laugh or simply turn off your TV.  Normally practical effects are a very good thing.  But not when they look like that. 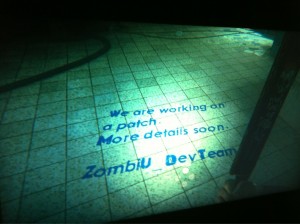 ZombiU, which released for the Wii U in late 2012, is a pretty unique, fresh and welcome addition to long list of zombie horror games.  Your lack of supplies, odds stacked overwhelmingly against you, and unforgiving decision-making make it a true survival horror experience.  Not to mention the cool use of the WiiU peripherals.

Unfortunately, this already very difficult game was made even more difficult by big-impact glitches that would make all the time and hard work put into upgrading your character and finding supplies essentially a big waste.  System freezes, quest completion trigger malfunctions, vanishing ladders, and more riddled this sprawling, and otherwise fun, game.

A patch was released earlier this year fixing many of the major glitches, but some still persist, and one has to wonder how much better this game would have done in early 2013 had they been addressed closer to its launch.

We tried.  We really tried, knowing that Sleepy Hollow, as a TV show, wouldn’t hold any kind of semblance to the original gothic legend.  Shame on us for giving it the benefit of the doubt.

In line with every other recently romanticized iteration of classic tales and monsters, Sleep Hollow, tries to modernize the story with a contemporary setting and witty banter, whilst at the same time butchering everything that makes the core story so great to begin with.

For instance, in this rendition the Headless Horseman is Death.  Like, the Death.  And he works for Britain. Ichabod Crane is no longer a school teacher but rather a Colonial soldier for George Washington.  Like, the George Washington. Top it off with some interdimensional time travel and you have yourself a primetime winner…says FOX execs.

I guess we can count ourselves lucky to even have the names Ichabod Crane and Headless Horseman, because other than that you’d be hard pressed to find any source material here.

If you’re looking for some horror scares from 2013, look elsewhere than Sleep Shallow.

13.  The Haunting in Connecticut 2:  Ghosts of Georgia 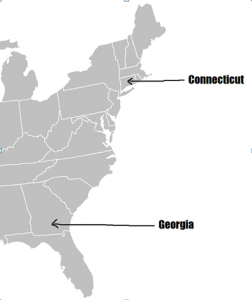 You read that right.

But then again what do they care? People will buy into it and the margin between its low production value and revenue will be enough to warrant The Haunting in Connecticut 3:  Spirits of Uranus.  And that’s what’s wrong with the horror genre.  We let them get away with it.  Please let 2014 be the year you vote no on this debauchery.

Bad Behavior has blocked 1287 access attempts in the last 7 days.