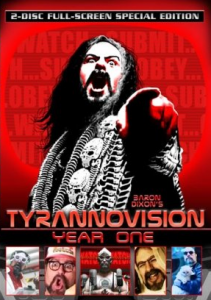 Baron Dixon wears many hats. He’s an artist, musician animator, poet and has had numerous on and off screen duties on indie horror films like American Alien and Blood Bath of the Bat-Beast. He’s also an evil dictator.

Okay, he only plays one (among many other roles) on the beautifully bizarre sci-fi web series Tyrannovision, but he does it so well that it just had to be noted. Said series deals with the ruler of Tyrantulania’s ongoing struggle against other tyrants and let me tell you, it’s a riot. A lot of other shows would suffer from chroma key sets and having the same person play multiple roles, but the unique artistic design makes it all work. If the promise of hilarious comedy and political commentary doesn’t entice you, the art should. I also love the bone-themed costumes, which have their origins in a Halloween costume and a never made science fiction production. Speaking of origins, Tyrannovision got its start thanks to Baron Dixon getting involved in the “NTO Tyrant Wars” role-playing game on LiveVideo. Although some viewers might find the references to characters and events from other videos a bit confusing at first, it all makes sense the further you get into it. Although more focused on sci-fi, there’s enough mad science and strange creatures sprinkled throughout to keep horror fan happy.

After reading all that, I’m sure you can’t wait to download a copy for yourself. But before you do, I want to note how Tyrannovision marks many firsts in the history of the “Free (Legal) Download” series. In addition to being the first web series that’s been offered, said series spans across two discs and is available in both NTSC and PAL formats! As you can tell from the image illustrated this article, the download also includes cover art. The only thing you don’t get is a two disc DVD case, but I’ve got you covered on that front.

Although the series is on hold for the moment, this isn’t the end of Tyrantulania. In addition the upcoming movie Klash of the Tyrants, there are also plans for another Tyrannovison film called Empire Highway which promises lots of goodies for horror fans. In addition to zombies, dinosaurs and alien tourists, there will be plenty of other monsters and horror references. There’s even a parody of the infamous “The Thing” tourist trap! Keep your eyes on the official Tyrannovision website (and Facebook page) for further details. In the meantime, Baron Dixon is currently scoring an upcoming film called The Plutonium Pin-Up Project.

Special thanks to Baron Dixon for use of the image!

Bad Behavior has blocked 1247 access attempts in the last 7 days.