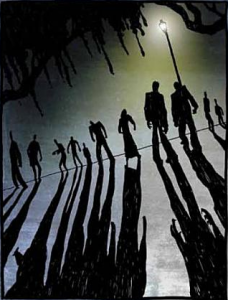 The response to last year’s selection of free music inspired by (or relating to) zombies was so overwhelming that I simply had to do a follow-up. So here’s 13 more terrific (and terrifying) tunes for you. Just be sure to click on the link on the left for the free download and the one on the right for the artist’s official website:

It should be noted how the opening track, Jerry Vayne’s “Zombie Stomp: March of the Undead,” is not the same version which can be found on his CD Damnations Embrace. That version is remixed while this is the original version heard on the Rotting Flesh Radio compilation Dark Pandemonium – A Descent Into The Labyrinth of the Mind. Here’s another bit of interesting trivia for you: the Radioactive Chicken Heads song “Atom the Amazing Zombie Killer” is the theme to an independent horror comedy of the same name!

As always, Ray O’Bannon is offering free printable CD sleeves and tons of other zombie goodies for you to enjoy. If you burn this compilation to a disc, I highly recommend using one of his sleeves to store it in. You can even print out the image illustrating this article and glue it onto the sleeve if you want to!

Special thanks to the CDC for offering the open source image (and to Bob Hobbs for creating it)!

As always, Gravedigger’s Local 16 is not to be held responsible for anything that may occur (be it good or bad) as a result of downloading from any links given here. Attempt at your own discretion. We make no guarantees about the future availability of the tracks listed above, so get them while you can. Blah blah blah…

Bad Behavior has blocked 892 access attempts in the last 7 days.