Horror Section/Eaten Back To Life, SPLIT IN TWO

Today, we are happy to share another entry from frequent contributor, Kraig Khaos. Kraig has a reoccurring feature on 6ftplus – Killer Kuts from Kraig Khaos – where he shares a song from a vinyl recording. Kraig has a new podcast called Uncommon Interests, where he discusses a wide range of pop culture ranging from the mainstream to deep underground. Being a vinyl enthusiast, Kraig has a post about one of the best releases of 2014. 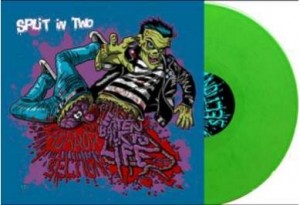 It’s rare that you ever get a split album or EP that has two bands that match up so well. But Eccentric Pop Records has done just that with their release of Horror Section and Eaten Back To Life: Split In Two LP.

Each band puts in 5 songs each of melodic, catchier-than-a-zombie-virus punk rock with a horror slant. Both bands may be similar in sound, but that’s not to say that they are both the same exact thing.

Horror Section brings in songs of broken hearts and broken trust with witty lyrics and hooks that will keep your toes tappin’ long after the songs have ended. Imagine an early Alkaline Trio (and I mean that in a GOOD way) with Screeching Weasel melodies that pay homage to early to mid-90’s pop-punk, and you’re on the right track.

Eaten Back To Life play a more guitar heavy form of horror punk. That doesn’t mean that they swerve into metal territory, because they don’t. But the guitar solo in “The Tall Man” may very well melt your face off. With gruff vocals and strong song structures, EBTL will have you singing along to their songs immediately.

On most split albums, there is usually a clear winner of which band is better. But “Split In Two” proves that it doesn’t have to be that way. Both bands give 100% and kick mutual ass. These aren’t just throw-away songs that didn’t fit on an album. These are genuinely great songs by two bands trying hard to put their best undead foot forward. 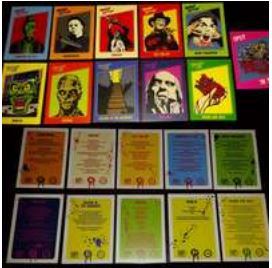 Eccentric Pop Records knocks it out of the park with this release. Not only does this green vinyl come with a download code, you also get an awesome 11 card trading set. Each card has full color artwork based on a song from the record with the lyrics on the back. And since most songs are based on horror films, some of these images are gonna be familiar to you horror buffs. And you get ALL of this for only $12.

So go on over to Eccentricpop.com and order what is being called one of the best releases of 2014. You won’t be sorry. And while you’re at it, check out some of the Kepi Ghoulie/ Groovie Ghoulies stuff they are releasing now and in the near future. Including a Kepi Ghoulie vinyl subscription.