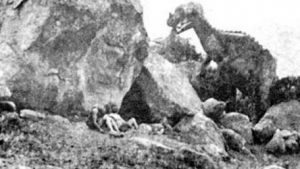 Feeling snubbed by his girlfriend at a party, Harry Faulkner finds himself dreaming of the past where a tribe of cave people is attacked by a rival tribe for their women. Numerous fights and occasional encounters with prehistoric monsters ensue.

I’m sorry for the shortness of the synopsis, but there really isn’t much plot to be found in Brute Force. The arms race between the two tribes for control of the women takes up the bulk of the film, but the main reason to watch this are the “dinosaurs” that appear early in the film. There’s a normal sized boa constrictor with a horn glued on it, a photographically enlarged juvenile alligator with rubber attachments, and a huge moving model of a Ceratosaurus. Said model is rather impressive for the time despite it only being able to move its mouth, bob up and down, and shake its tail. Its brief appearance that closes around 8 minutes into the film marks the final time any dinosaurs appear and I have to wonder if there was originally more footage featuring it that wound up on the cutting room floor. Deleted dinosaur scenes would explain why what appears to be a turtle suddenly wandering around in the background of one scene featuring the alligator. Speaking of the alligator, its appearance must be seen to be believed. It has wings and so much other prosthetics glued on that it’s less of a dinosaur and more of a walking mess of rubber. The rest of the film’s 24 minute running time is devoted solely to the cave war and does manage to be fairly entertaining in spite of how many scenes go on for too long. The over the top acting by the rival tribe is downright hilarious and while it is enjoyable, it does clash with the film’s high body count. There’s even a point where one of the bad guys strangles a child to death!

Brute Force is actually the sequel to an earlier, dinosaur-free film called Man’s Genesis. At some point, footage from both films sloppily edited together to create a movie known as The Primitive Man and you can often find the subject of this review erroneously listed under that name in film listings. Despite being released on 8mm for home viewing by Blackhawk Films (and being the work of D.W. Griffith), Brute Force has never surfaced on VHS, DVD, or Blu-Ray! It’s a shame, as has an important place in the history of motion pictures. Why? It appears to be the earliest example of a film using living reptiles to depict dinosaurs onscreen. Thankfully you can easily find a copy online if you decide to give the movie a try.