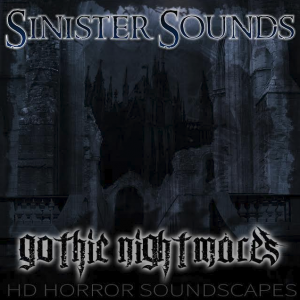 Scott Karan has been very busy since he released Dark Ride back in 2012. 2014 saw the release of his spooky single Happily Ever After, which made excellent use of soft music to create feelings of dread and mystery. That year was also when he won a Frightee Award. This was soon followed by reissued version of his past Prelude to a Nightmare albums with new cover art on ReverbNation. Gothic Nightmares is the first release from his new side project, Sinister Sounds. In addition to creating high definition soundscapes and sound effects, the project will also feature a vast collection of royalty free sound effects and instructional videos on making your own. Mr. Karan also informed me that Sinister Sounds will be open to collaborations and how this is part of the reason Prelude to a Nightmare is being kept separate from it.

“Hey, Hey We’re the Monkeys” is a misleading title. It makes me think of a jungle or maybe a warped parody of the so-called “Faux Four.” But instead it consists of chanting monks, distant tolling bells and wind effects! This is a perfect match for a cult sacrifice scene or a hallway lined with robed figures. Just how many are really costumed performers ready to leap into action is entirely up to you. “Subterranean Terror” uses unnerving noises and dripping sounds to transport the listener into an underground realm where strange creatures cry and skitter about in the darkness. Haunted caves, dungeons and mine shaft scenes could all benefit from having this playing from a hidden speaker. This originally appeared as a bonus track on Carpe Noctum but was left off of the reissued version. However, this version is much longer than it was in its original presentation. Tolling bells and creepy whispers are the stars of “Demonic Confessions,” but there are other effective little touches as well.

I just love the name “Gravedigger’s Alarm Clock (Ambient Mix).” Tolling bells make another appearance here and the heavy musical tones are downright chilling. The wailing winds which close the track out are also a great touch. “Tales From the Crypt” is the longest track of the album, which is impressive given how only a handful are more than a few minutes in length. It’s a disturbing audio tour through a dank and pest-ridden crypt which absolutely needs to be heard in order to be appreciated. “Zombie Brunch” features just what the name implies: a soundscape of groaning zombies messily chewing human flesh. “Smoldering Sanctum (Ambient Mix)” takes us back the underground places promised by “Subterranean Terror” and “Tales From the Crypt,” but does offer a few new touches of its own. Finally, the digging and heavy breathing of “Graveyard Shift” close things out. But is it the gravedigger or something else that’s doing the breathing? Only one thing is certain: it’s a must for any haunted cemetery setup. You don’t need an animatronic gravedigger, but it admittedly does go well with the digging sounds. If your cemetery is big enough, you can get away with not showing a gravedigger of any kind and let visitors assume they are working somewhere out of sight.

Gothic Nightmares is an absolute must have for any haunt owner or Halloween lover. Its versatility allows for use in countless types of haunt scenes and the length of the tracks make them ideal for looping. All you need to make this perfect for repeatedly playing in full on All Hallow’s Eve is have a few tombstones and prop zombie in your yard. Or you could really give people a good scare by using a helper pretending to be an inanimate zombie. It’s all about what works best for you. I am definitely looking forward to seeing what other material Sinister Sounds will bring us in the future.

Special thanks to Sinister Sounds for use of the image!