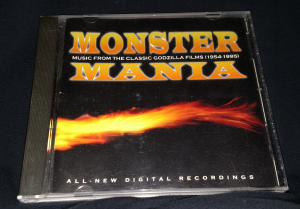 Up until 1998, American Godzilla fans who wanted to listen to the uninterrupted music from the films they love had very few options. Unless you were able to import albums directly from Japan, the selection was limited to Neil Norman & His Cosmic Orchestra’s decidedly bouncy covers of “Monster Zero March” and the classic Godzilla theme from the Greatest Science Fiction Hits series. One of the few good things about Tristar’s so-called Godzilla movie was the wave of products associated with the Japanese films which flooded the stores to cash in on the hype. One such release was Varѐse Sarabande’s Monster Mania: Music From The Classic Godzilla Films (1954-1995). It was originally promoted under the same “Godzilla: Classic Themes From The Classic Films” and some CDs bearing that title seem to have been released, but apparently Toho made them change the name for some reason. But that isn’t the important part. You’re reading this to see how the new recordings compare to the original versions used in the movies!

The drum footfalls of “Godzilla-King Of The Monsters (Main Title)” are not quite the same as you hear in the film, but the power of the composition is still there. It’s highly enjoyable despite such small differences. The rousing and militaristic “Destroy All Monsters (March)” clearly shows off its musical influence from Akira Ifukube’s previous work. Not that it makes the music any less great. As you have probably guessed from the title, “Godzilla Vs. Mothra Suite (Main Title, The Letter, Song Of Mothra, Mothra March)” is a combination of several compositions in a single track. The main title portion devotes equal attention to Godzilla and Mothra. The musical sense of power represents Godzilla and the light fluttering notes are obviously supposed to represent Mothra. The soft piano work wonderfully compliments the sadness of “The Letter” portion of the track and despite it being an instrumental, I can practically hear the lyrics of the Mothra song. The chimes were also a nice touch. The last portion is a Ifukube military march with touch of his classic Godzilla theme. Taking a break from Ifukube, we move on to Reijiro Koroku’s “Godzilla 1984 (Main Title).” The opening cymbal crash and moody, low notes help the track’s overall melding of bombast and suspense. The drumrolls are a great touch as well. I also enjoyed the piano work of the pleasant “Godzilla 1984 (Love Theme).” As the original Japanese soundtrack for King Kong vs. Godzilla didn’t get released in America until 2006, the inclusion of “King Kong Vs. Godzilla (Godzilla Revived/King Kong Transport Operation)” was a real treat for G-fans back in 1998. As expected, they opted for the heavy material rather than the Lyman-esque jazz tracks. The second half of the track is one of my personal favorites. It has such a busy feel and splendid use of percussion and horns. The way Takayuki Hattori’s “Godzilla Vs. Space Godzilla (Main Title)” makes use of drums reminds me of something from the James Bond franchise. While we’re on the subject of that particular film, “Godzilla Vs. Space Godzilla (Love Theme)” offers the listener a quieter moment. I only wish it had been spaced out further from the other love theme on the album.

Masaru Sato’s “Godzilla Vs. The Sea Monster (The Departure From Retch Island)” brings us both the feel of south seas adventure and confusion for those who had seen the island’s name translated as either “Letchi” or “Retchi” over the years. Although it’s not quite the same as original, anyone who has seen the film could easily identify what movie it was from just by listening to it. Akira Ifukube returns with a vengeance for his final Godzilla outing with “Godzilla Vs. Destroyer (Main Title/Destroy Hong Kong)” and includes his trademark use of steady drums implying heavy footfalls while “Godzilla Vs. Destroyer (Requiem)” is appropriately soft and mournful. “Son Of Godzilla (Godzilla & Minilla)” is pretty darn close what’s heard in the actual film. It’s goofy and light, with just touch of menace that leads so nicely into the guiro-filled “Son Of Godzilla (Kamakilas).” Since I have already expressed my affection for the original, I’ll just say this is different enough to be distracting. Koichi Sugiyama’s “Godzilla Vs. Biollante (Main Title)” is both heavily inspired by Jaws and calls back to the opening theme for The Return of Godzilla. The soft and beautiful feel of “Godzilla Vs. Biollante (Biollante)” is presumably a reference to Biollante’s rose form. “Godzilla Vs. Biollante (Super X-2)” owes a LOT to John Williams’ Superman theme. The evocative piano and drums of “Godzilla Vs. King Ghidorah (Opening & Attack On The City)” are coupled with bassoon work to create some perfect Ifukube moodiness and “Godzilla Vs. King Ghidorah (Terasawa & Emmy/Goodbye, My Home Town)” offers plenty of sadness thanks to its expert use of flute and string work. The rousing “Godzilla Vs. Mechagodzilla (Main Title)” has plenty of callbacks to classic Godzilla material. Speaking of which, aspects of “Godzilla Vs. Mechagodzilla (G Force March)” should remind listeners of what they heard earlier in the album. Listening to “Godzilla (Requiem)” makes me appreciate “Godzilla Vs. Destroyer (Requiem)” so much more. Its occasional usage of chimes are a touch I had completely forgotten about. The drums and cymbals of “Godzilla-King Of The Monsters (Reprise)” come back for one more glorious time. After a lengthy wait, we get what seems to be another reprise…until the electric guitars kick in for a secret track! It’s a cover of Blue Öyster Cult’s “Godzilla” by Black. Its use of metal-style vocals is an interesting touch and it makes for a fun way to close things out.

Conductor Randy Miller and his orchestra have done a marvelous job covering a range of material that (more often then not) goes toe to toe with the originals. It’s all to easy to get lost in the overall spectacle when trying to focus on the music while watching the movies and listening to them like this allowed me to fully appreciate the music for what it was. I recall some reviewers complaining of being able to hear the musicians breathing but I’ve never noticed it. Although many soundtracks from Godzilla films have since been released in America, there are still plenty of reasons to track down a copy of this. Tracks 3, 5, 8, 9, 12-16 and 18 still have yet to be released in their original form in America and this album is the only way to experience what things might have been like if Akira Ifukube had recorded his work in stereo. Considering how Toho made an ultimately failed attempt to rework some original monaural recordings into stereo for the Shin Godzilla soundtrack, it looks like this album will remain the only way to do so for quite some time. It’s also an interesting time capsule of sorts. Note only are some of the translations “off,” but this came out at a time before Toho really put its foot down about the 1984 Godzilla being referred to as The Return of Godzilla and before the name Godzilla vs. Destoroyah was settled on. But in the case of the latter, the album does have the benefit of the film having not having been released in the States at the time. But I can’t complain too much seeing as how I opted to use Amazon’s version of the track names, which combine the title of the film with the title of the tracks themselves, rather than just use the track names from the back of the CD case. The liner notes offer a nice look at the history of the Godzilla franchise and the various musical influences and techniques present in the selected tracks. If you pay close attention to the album credits, you’ll even spot a credit to the band Black regarding their hidden contribution! It’s currently out of print but you can find it at a reasonable price if you look around. Hopefully Varѐse Sarabande will reissue it now that Legendary has boosted American interest in the Big G.

Bad Behavior has blocked 545 access attempts in the last 7 days.