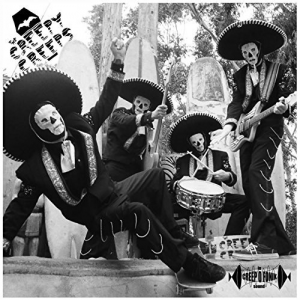 Back when I looked at the music of Creepxotica, I provided a few details about the Creepy Creeps since the two bands are interconnected (more on that later). But to help all you new readers catch up, here’s what I know: The Creepy Creeps were founded in 1999 and played their first show in 2000. Combining their musical talents with go-go dancers, hype men and wearing different masks in various appearances, the Creepy Creeps made a huge splash. Rock legend Robert Plant took notice of them in 2011 and asked them to open for his revived Band of Joy in certain California performances. They won “Best Live Show” and “Best Band” in the 2013 San Diego Music Awards and have played at Tiki Oasis numerous times. On top of that, one of the Creeps (and one of their hype men) even made an appearance in IDW’s Godzilla: Rulers of Earth comic book series! To say they’re a big deal would be grossly understating things.

Who are the Creepy Creeps? I’m actually still trying to figure that out. The profile page from Dionysus Records which I linked to above credits the following:

But in the same page, the band’s founder Creepture is noted separately and I had to look at a different website to see what instrument he plays! On top of that, a group member named Gatos Locos is noted several times on their Facebook page, but I can’t determine if he’s a new member or if he just changed his stage name. Adding to the confusion is how it turns out Creepxotica has 5 members while the Creepy Creeps have 4 (according to publicity images and album covers for both bands), despite many websites treating the two as the same band performing under a different name! I did find some information about the members of Creepxotica, but no stage names are given and some of the names differ from the members tagged in various photographs on the Creepy Creeps’ Facebook page! So although I can’t say who performed on this particular album, I can confidently say they did an excellent job.

“Biffins Bridge” shows the band knows the importance of a good first impression. In this very catchy track, fast and heavy percussion is expertly blended with guitars. You also get to enjoy lyrics about a fight at the most unfortunately named bridge in the world. Seriously, don’t look up that name online if you’re not at home alone. It’s also worth noting how the back cover of Creepxotica’s Haunted Bossa Nova refers to a platform they performed on as “Biffins Bridge.” Since only a handful of tracks don’t have lyrics, I think I’ll only bring up when a track is instrumental from now on. Drums and reverb usher us into “Cleto.” It’s heavy yet bouncy and I also enjoyed how the well the cymbals melded with the tambourine and organ work. “Creepin Round” will blow you away with its classic surf opening and use of percussion. An organ and guitar blend opens the short ‘n sweet “Drop In.” There aren’t any actual lyrics, but there is a chant of “drop in” mixed in with the drums and cymbals. Although clapping joins the mix in “Here We Come,” thunderous reverb and jaw-dropping guitar variations are the stars of this particular song. Guitars blast off and never slow down in “Log Boss.” There are plenty of classic surf touches to be found in this, along with plenty of organ work.

“You Must Fight to Live on the Planet of the Apes” is perfect “get up and dance” music. Not only are there group vocals in this, but there’ also all the profanity you wished Charlton Heston used back in 1967! The instrumental track “Shindig on the 13th Floor” changes things up a bit with its kooky, spooky organ beat. There’s a great powerful end buildup, but sadly the ending is rather abrupt. Perhaps it was meant to blend into the opening of “Solid Ghoul Stomp.” Although it removes the organ work heard in the previous track, it retains the use of drums and guitars. It also has some of the reverbiest reverb I’ve ever heard. I enjoyed the percussion in “Spider Zombie,” but the guitar work made it a personal favorite of mine. The organ backing helps keeps this instrumental number appropriately creepy. “The Wheel” features a Deliverance-style duel between a guitar and banjo at the beginning, but does own thing once the drums join in. The “heys” and howls from singers are great touches as well. finally, things come to a close with “Tiki Mug Shot.” Things start off a bit bouncy thanks to the percussion and organ work, but the cool and creeptastic part about a minute in really livens things up. This instrumental track also features some pretty pickin’ work on the guitar. You know what this means: great song, great closing and great album.

I don’t know if the musical style of the Creepy Creeps can best be described as “horror surf with some punk mixed in” or “surf with horror punk mixed in,” but I do know they give the Ghastly Ones a serious run for their money! Listening to The Creepy Creeps makes me regret putting off listening to the band for so long. It’s not like they haven’t been active since this album originally came out. Fink About It! was released in 2009 and Last to Leave was a 2016 release! I definitely have some catching up to do. The band’s 2017 plans seem to be a split between live performances and Creepxotica. Said side project just released Swinging Sounds From Beyond the Nether Regions on vinyl and Creepxotica Featuring Rachel DeShon on both digital and vinyl. I’ll be checking out both for next year’s Freaky Tiki Surf-ari, so stay tuned!