Fear For Your Ears IX 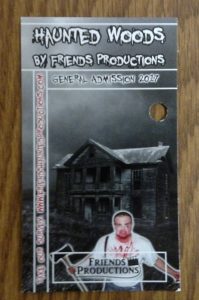 The Harnden Tavern in Wilmington, Massachusetts is home to many things. Having been in place since the 18th century gives it plenty of history and rustic charm. A museum devoted to local history is housed within it walls and every October its woods become a haunted attraction. Well, it houses several attractions according to the haunt’s website, but I’m counting it as a single haunt since those attractions are just themed individual segments of the haunted woods. Keep in mind how the Friends Productions website actually discusses the theme of each segment, so only visit that part of the site if you don’t mind spoilers. But I’m getting off topic…

Friends Productions was founded in 2009 by Stephen Valenti. Stephen, along with his parents and friends, had always enjoyed visiting haunted attractions and it should come as no surprise this led to him wanting to do one of his own. He launched the first annual Haunted Woods that year (albeit at a different location) His friends and parents have been with him from the beginning (his father even helps with the construction and lighting) and the event is supported by the Wilmington Town curator, Wilmington Historical Commission and Wilmington Minutemen! There’s also plenty of student volunteers from the local middle and high school and the proceeds are used to help with the upkeep of the tavern and its museum.

I visited in 2017 on their second night of operation. My visit was later in the evening than I had originally planned on, which might explain a few things I’ll be noting later in the review. It was very dark on the road to the tavern and I was getting concerned my GPS wasn’t working properly, so it was a huge relief to see a sign and partitions explaining you can’t park in that area and where to go for free parking. The realistic Jason Voorhees dummy was a great touch and being able to see some projected lighting effects on one of the buildings helped increase my anticipation. I was directed into to a grassy area by a traffic guard and old men in colonial gear. Screams and a chainsaw could be heard in the forest nearby and only a little light could be made out among the dense foliage. This was a very promising sign of things to come. As I passed by the historic tavern, I noticed the door was open and people were inside. Looking back, I wish I had tried going in since it looked really cool in there. But since there wasn’t anything haunt-related in there, I pressed on to the waiting area. There was a food tent to the right of the ticket table, but the really interesting stuff was near the stairs on the side of the old black building. Not only was one of those red and green “light show” devices you often see in December aimed at the building, but there was also a projection of bloody messages appearing on white area (complete with sound effects)! Sadly the projector was out in the open on a table. Hopefully they’ll come up with a cool enclosure for it next time. What wasn’t so noticeable was the evil butler prop peering out a window. Despite it being lit by a dim strobe light, the effect was very subtle and those who aren’t paying attention might miss it. The wait in line wasn’t too long, but I did appreciate the other distractions. A red spotlight was pointed at the rules and it was nice to see a haunt actually have their no photography rule out in open for a change. But the two performers who occasionally came out of the entrance to interact with people weren’t the only live entertainment. Sometimes masked evil mimes would go on the stairs and do creepy little performances!

Some might take issue with how the ticket taker repeated the rules and safety issues, but not me. I thought this was the perfect way to keep people from ever claiming they didn’t notice the rules. The people I got stuck with sure didn’t. Seriously, who asks if they can run through a haunted attraction? They were also obsessed with yelling what was either a friend’s name or a reference to an internet meme. not only was this distracting, but they insisted on staying behind me and trying to rush through the haunt! I tried offering to let them go in front of me, but they refused. Thankfully I started walking so slowly I was able to force them to go ahead of me. This will become important later in the review.

My journey took me through a small haunted house before I exited onto the trail itself. There were also other small structures to go through in addition to the various outdoor scenes and scares. Last year marked the appearance of two new parts of the haunt, but only one of said parts (the asylum) has returned for 2018. As the Haunted Woods seems to repeat portions of the haunt (with new tweaks) each year, I will do my best to avoid spoilers when possible. But I do hope the hanging body part area returns for 2019 and that future versions of the dark maze includes more things on the walls for visitors to feel as they go through. I also enjoyed the creativity on display. Remember those glow-in-the-dark “3D” hall hangings that used to be everywhere in the 90’s? Imagine one of those put on the ground with pine needles obscuring just enough of it so that it looked like a ghost was emerging from the ground. It was refreshing to see their chainsaw guy wasn’t just someone in a hockey mask like at countless other haunted attractions and I loved how they worked in the noise from the generator into the haunt itself. Having it obscured by a spooky junkyard made it seem like the noise was actually an intentional part of the scene! It was so great to visit an attraction where the organizers just didn’t let the noise happen in any old part of the haunt and hoped nobody would notice. There were a variety of scare tactics used by the performers. Some jumped out at guests, others pretend to be static props, some follow you and stay out in the open and get in your face! It wasn’t rare for groups of the same type of monster to single out and go after specific people. I also liked how some waited until visitors seemed to have their guard down before striking. While I didn’t find the part where a performer sits on top of a fence for awhile until they jump off and charge at you to be scary, I can see how it might be suspenseful to some visitors and do appreciate the creativity.

However, there were some other issues which I can’t find a positive side for. Several haunt performers were either on their cell phones or walking around with their masks off. One actually reacted with surprise and panic when he saw me coming his way. The patrons shouldn’t be the ones doing the scaring by catching people off guard! There were also several times where I saw someone’s head while they were trying to hide before they leapt out. There were even a few times where they never stopped hiding! I have to wonder if this happened so many times since it was towards the end of the night. Although the “street clothes and a mask (or makeup)” look did work with some characters, I felt there were a little too many cases where it didn’t. That said, there were plenty of people in full costumes. There was also an area with a prop that was clearly broken. How could I tell? Because it was set up right next to a working version of the same prop! Come to think of it, they were in the same area where a lenticular haunted portrait was hanging from a tree. Wouldn’t it make more sense to have it inside a building instead?

With the exception of the bloody weapons garland, I didn’t mind the presence of numerous props from pharmacies and chain retail stores. It’s a fundraising event put on by a volunteer staff, after all. You shouldn’t be going in expecting to see expensive custom animatronics and the like. It also made me appreciate the seemingly custom stuff even more. Their placement and the use of colored lighting helped cut down on one’s ability to see ahead into other areas. It pains me to say this but I wish the floodlights weren’t so out in the open. But if safety regulation prevented Friends Productions from putting monstrous tree faces over them to disguise their true nature, I can’t fault them for that. If possible, they might want to look into using electric lanterns as a light source. That way their being out in the open only adds to the haunt’s atmosphere!

Picking a rating was difficult, especially since I got rushed through the first portion of the haunt. But I think the attraction’s creativity and successes overwhelmed its other issues. Besides, you get to have a good time and help preserve a piece of history! Here’s hoping we get to see more from Friends Productions in the future.