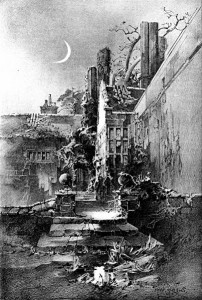 Chances are that you’ve heard stories about a haunted house with 13 floors somewhere in your state. You know, the one that nobody’s ever been able to complete since it’s so scary and has trapdoors that drop you out of the place? In fact, the management is so confident nobody can finish that they’ll give you a partial refund for each floor you complete and will give a complete refund to anyone who finishes the entire house. Only a select few have made it to the 13th floor…and they all died of fright before they reached the exit.

As you’ve probably guessed, this house simply does not exist. It’s just an urban legend kept alive by stories of friends of friends who know the location and the occasional hoax or two.

Despite stories of such a place in every state across the nation and countless people searching the internet, nobody can ever provide its exact location. This is a dead giveaway that the house doesn’t exist. This Snopes.com article explains about the impossibility of such an attraction and notes some haunted houses that have cashed in on the legend by offering refunds if visitors are able to complete certain tasks. In fact, I have actually found some of these houses online. The Urban Legends haunted house in Michigan apparently offers a refund if you’re able to find a secret room inside the “Pitch Black” haunted house. Another Michigan haunt, the Realm of Darkness, offers to double your money back if you can defeat the wizard. However, you supposedly have to choose the correct items out of ridiculous amount of other items to get the gems to defeat a wizard, whose secret location in the haunt must also be found. Finally, the 13th Floor haunted house in Colorado offers a refund to every 113th person who goes through the attraction.

But how did the legend get started? Leonard Pickel, editor of “Haunted Attraction” magazine, suspects that it started in Kansas City and spread across the nation. His idea seems quite credible, as he apparently was introduced to an earlier, lesser version of the story that only involved two floors and a time limit. Some have suggested that Raven’s Grin Inn could’ve sparked the legend. After all, it does offer multiple levels and a long slide that spits out customers. However, the house’s owner has stressed that he only has 7 levels and notes that he doesn’t offer any refund for completing the house.

Another haunted house that might’ve sparked the legend (and most likely helped it along) is Britannia Manor. Created by Richard Garriott, video game designer and creator of the Ultima franchise, this massive haunt is based out of his mansion (and takes two months to get “back to normal” after the haunt has run its course). The admission was free, but only a limited amount of people could go through. Said people had pass a fitness test in order to enter, due to the various challenges of crawling through tunnels, swinging over ropes, and the like. Visitors also had to be on the look-out for secret passages, solve puzzles, and contend with surprises like collapsing walls. You can read more about this amazing haunted house at these three sites.

Although we’ll probably never know for sure where the story was born or what house (if any) sparked it, we can all rest assured that the legendary, money-back haunted house with 13 floors doesn’t exist. However, it’s almost guaranteed that the legend will never die, no matter how many debunkings are written.

Bad Behavior has blocked 1244 access attempts in the last 7 days.