Of course this was posted last night 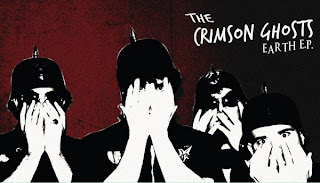 Out of Massachusetts comes The Crimson Ghosts, a band that plays instrumental surf renditions of Misfits songs. If you share my worldview, those quantifying elements alone should get an automatic ‘thumbs up’ and an enthusiastic cry of ‘Holy shit, when and where can I see this band?’ You’d also say ‘Why is there a German band of the same name?’ and I would say ‘Don’t know, but listen to the Mass. one first.’

It’s a noticeable pattern. I listen to surf music. A lot. And during this time of year, it’s hard not to notice the Misfits. There are plenty other bands out there that incorporate spooky into their music and not be a Misfit-derivative. But I will get into them in due time. I owe a bigger post and I think the Crimson Ghosts deserve it. Plus, Rue Morgue gave them a backhanded-compliment of a review and I want to prattle on about some things.

The Crimson Ghosts were the first band I saw at the Drop Dead Festival back 2005. The festival actually started late due to some bands getting lost. I was down in the middle floor (second, lower, who knows what they call it?) a few beers into it when the music finally started. The Crimson Ghosts kicked off the Festival for me, who had skipped the first night because the two bands I wanted to see were playing the second and third night. I had showed up to catch Gein and the Graverobbers that night. 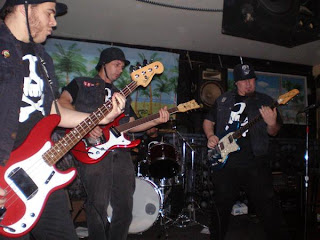 Gein, of the aforementioned band, would play the drums for the Ghosts that night. He currently plays bass for them now, with Clay Neely on drums now. They’ve now expanded from the three-piece I once saw, back to a four. John Koziak still fronts the band on lead guitar, with Max Reverb (of the Quasi-Men, another band you should check out) kicking ass alongside him.

The Crimson Ghosts were the best way to start the night for me. A huge smile stuck across my face as I bounced from band-to-band in the two floors of NYC’s The Knitting Factory. I got their CD and me and a friend listened to on our way home when the weekend wrapped up. Three years since and I’ve been able to catch them play at least once every twelve months, up to a total of in three different states, opening for a variety of bands and headlining their own shows. This November 1st, I add a fourth state to the list when they play Salem, Massachusetts, after/before a showing of ‘Die You Zombie Bastards!’ in a perfect way to send off Halloween. You should go, if you can.

While flipping through a ‘Rue Morgue’ magazine, I caught a moderately blah-review of the latest release, ‘Earth E.P.’ While complimenting the Crimson Ghosts on their imaginative versions of the Misfits classics, it kind of wrote them off as a novelty, saying that it’s ‘only seventeen minutes long,’ so the listener wouldn’t get overwhelmed by the ‘Dick Dale-sque’ guitar playing. It was kind of dumb to mention the shortness of an ‘E.P.,’ which makes me wonder if the reviewer knew the difference between the two formats. Still, they gave them a low-but-not-too-low score.

I didn’t take it personally. It’s clear that the dude writing the review was more akin to the original Misfits songs and had low expectations of this. He or she opening up the review by, and I paraphrase, ‘The Nutley Brass trashed the songs, but hey, these Crimson Ghosts don’t suck so much.’ It was a half-ass review, in my opinion, so I figure I’d give it another half-ass one myself. The Crimson Ghosts deserve a full ass. 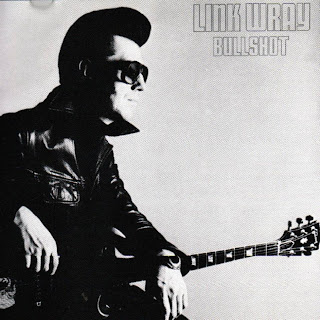 See, I didn’t get into Link Wray until hearing of his passing. Like most of the great ones, I don’t know of them until they’re gone. I recognized his songs ‘Rumble’ and ‘Jack the Ripper,’ though I could never put a name or a face to the sound. I picked up his Greatest Hits (which remains one of the few, if not the only, CD of his available in record stores) and found myself a fan. Years later, I would find a copy of his ‘Shadowman’ release in the used piles of a downtown New Haven record store.

‘Shadowman’ is notable for Link’s renditions of some famous songs, specifically Elvis’s ‘Heartbreak Hotel’ and a real sick version of Creedence’s ‘Run Through The Jungle.’ Where Fogherty’s original version has the song sound like a panicked call through the unlit corners of a dark jungle, Link Wray envisioned the song and the titular jungle as an industrial landscape. The heavy tones and beating notes gives the song a grimy, smoke filled monstrosity feeling. It’s a downright wicked interpretation which aims to make the listener feel a little tougher about him or herself. Total leather, sunglasses at night tough.

Link’s version of the song, much like any cover song, could spark the discussion of original-intention v. artistic interpretation. Should the initial output be left untouched or is it fair game once it enters the public discourse? Were the Ramones right for recording a version of Tom Waits’ ‘I Don’t Want To Grow Up’ or should they have left it alone? It’s really a rhetoric that ends up with an “Eh, maybe, whatever” result as a compromise between the two sides of the debate.

Whenever I read a copyright discussion, specifically involving the legality of the public domain, there’s usually a section venturing off into the undefined time of if/when art enters the public discourse. The idea presented is that after so many people witness an artistic expression, it becomes part of a shared experience and the creator (writer, filmmaker, musician, etc.) loses sole ownership over the art.

The trade-off is that the art becomes immortal. We as a society gain a character or a painting or a song that acts as a foil for our own creative device; the artist is allowed to profit from it for a certain amount of time before the benefits of immortality kick in. If there’s a Mary Shelly estate, does it get cash from the ‘Frankenstein Mobster’ comic book? Part of me wants to say no. 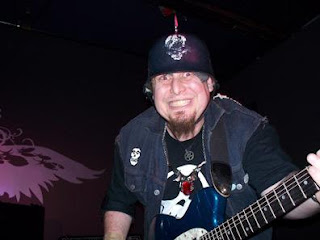 The founding monsters of Horror are all public domain deities – Frankenstein’s Monster, Dracula, the sort, all from the public consciousness. Those fears remain and it’s why there’s always going to be a vampire movie or a monster being made from the dead.

That sense of Immortality earlier mentioned applies more to the horror genre than any other in the last twenty years. Characters like Jason, Freddy, Leatherface and the rest remain under copyright but their images have become ingrained into our shared culture. I can see how some Europeans and Canadians would see a hockey mask and automatically think of an ice-sport, but c’mon. Jason Vorehees. Chainsaw = Leatherface and striped sweater = wise-crackin’, child-killin’ Freddy Krueger.

There’s a three-disc collection of The Ventures you can get for fifteen bucks at any major mall-related music store. It’s a bargain buy for a good three hours worth of music but two-thirds of the songs on said collection are not written by The Ventures. In fact, tracking down all the original artists, from the Challengers to the Surfaris, you could have a really nice surf music collection. All the artists are credited, so it’s not that the Ventures stole those songs. They borrowed.

Now, let me clarify that there is a difference between a reinterpretation and a cover song, though I’ll admit that it’s hard to tell that difference. For this discussion, a cover song is a color-by-numbers rendition, while a reinterpretation involves some artistic input that leaves the song both recognizable to its original form but changed in enough to differ this interpretation from another. By that definition, it might seem hard to call any song a ‘cover,’ but you can find some pretty limpid versions out there. No naming names here.

It also lends a little cre 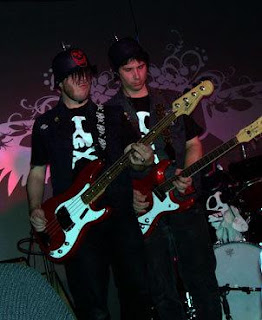 dibility to those ‘tribute’ bands that make the circuit, unless they’re just providing a cheap way for a fan to see Kiss, Ozzy or Pink Floyd. If a snyth-pop tribute band to Minor Threat would come along, it would be odd and slightly unfair to call them ‘just a cover band.’

I don’t see the Crimson Ghosts as a cover band, but a surf band that does renditions of Misfits songs. And, they’re also more than that. They’re carrying on a long-standing tradition in both the horror and surf genres of taking the shared culture to newer heights. Dick Dale, as the Rue Morgue namedropped, didn’t write his signature song ‘Miserlou.’ It’s an old Greek song that Dale turned into a surf-classic when pushed. And though the Crimson Ghosts didn’t write ‘Night of the Living Dead,’ their version on ‘Earth E.P.’ is fan-fucking-tastic.

(It’s also funny to mention: The Crimson Ghosts came about John Koziak trying to do an instrumental version of ‘London Dungeon.’ The band finally got it down as a recording with this e.p., and the song features a solo directly taken from ‘Miserlou.’ Shared culture.)

The Crimson Ghosts are doing that as well, taking their love of the Misfits and surf music and seeing how far they can go together. It helps that surf and horror go well together as we’ve seen (and will see in the coming days.) But they’re not a novelty. They’re making monsters, and the dead are coming alive.

*all pictures, save the Link Wray, were taken by Myra and found on the Crimson Ghosts’ Myspace page.