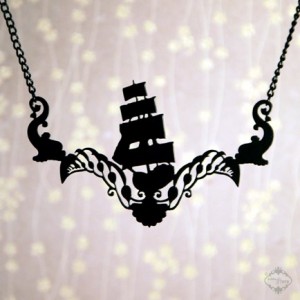 Leathbridge was named after Cole Leathbridge, establishing a small trading outpost for passing traveler’s sometime in the early 1800’s. Cole’s passing remains in question as a series of unexplained fires shortly after the event threatened to eliminate any evidence that the man, or any of his kin, ever existed. Though the town bears Cole’s surname, there hasn’t been a Leathbridge registered in the county’s limits for a good sixty years. There are hints of the bloodline that peek out, either through similar genetic traits of whispers when someone is required to produce birth certificates.

Mr. Fallingard was once rumored to be of the family, though the amount of things said about him in rude company are without number. Since absconding from the town a few generations back, it’s remains in question what exactly would happen if the Leathbridge family were to return. It’s not debated in the open, though there are many theories that can be discovered late at night if you buy the right person a drink.

Still, as we said, there are occasional reminders of the founder and hint at the everlasting influence he will hold over this town and those within it. One such reminder came about back in September.

As noted, the Freakshow family welcomed their second child. Young Poinsettia became an older sister to the young boy who, upon meeting for the first time, was introduced to everyone here at the Local as Humphrey. More accurately, he was introduced as Humphrey Cole.

No explanation was asked in regards to the child’s middle name, and none was given. The only time the matter was mentioned was when Poinsettia said “I hope he goes by Cole when he’s older. Humphrey’s an okay name and all but Cole sounds cooler, right?”

We’ll see how young Humphrey, or Cole, grows into this world. As of now, he remains a lovely young child with wide blue eyes and an infectious laugh. Both his mother and sister were wearing gifts given to them from Eric Berneau, the youngest Berneau brother of the Berneau Funeral Home. When he was asked, he mentioned Fable & Fury, a company who offers “Unusual silhouette jewelry and iconic portrait pendants.” 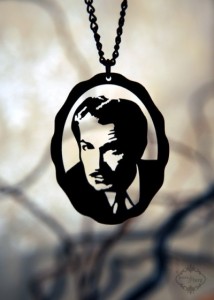 Capturing the likeness of many stars, ranging from Vampira to Hunter S. Thompson to Tom Waits, Fable & Fury provides a series of highly accurate and ornate portraits, captured in exquisite detail. In honor of the Vincentennial, the Vincent Price homage necklace is a stunning rendition of the maestro in such a way that we were at first hard-pressed to believe that it was made out of metal. It seems so delicate but it’s made out of durable stainless steel. How incredible! 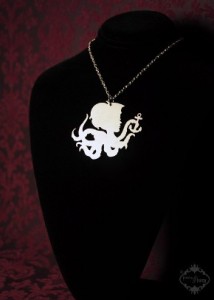 If you aren’t ready to carry a lifelike picture of a particular personality, there are some original artwork creations to capture your imagination. Like the Octopus Girl as pictured above. There’s always fear that a newborn will come out disfigured, mentally handicapped or worse. The parent, whose oft unconditional love provides a safe place for the child. However, the world is known to be cruel to the unusual. Show your solidarity with this necklace for all those who are and aren’t shaped like you. 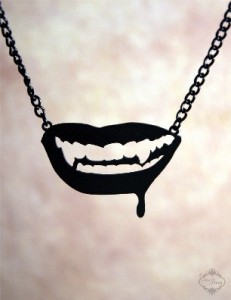 This piece was originally “…[c]reated for Dark Beauty Magazine, the limited edition vampire necklace is intricately laser cut stainless steel with black powder coat eggshell finish.” We consider this a fantastic piece of artwork, for the exquisiteness in the design and how it conveys malice and joy. When wearing it, you’ll convey both sex appeal and reasons for all around you to quiver at the hint of your wrath. 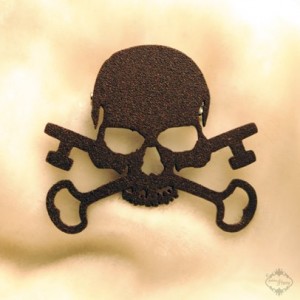 If you’re not a necklace person, there are plenty of options from Fable & Fury. One of their wonderful options is this Skull and Crossed Skeleton Key pin. It’s an elegant piece, available as a necklace as well. Bernie had this piece on, while Poinsettia wore the silver Ornate Bat Statement seen below. It was a great complement to her outfit, while Bernie’s regal look was only outdone by the beaming pride from being a new father. 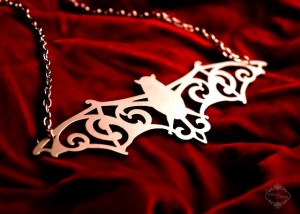 Check out Fable and Fury’s etsy store to peruse their selection. You’ll be surprised at what you’ll find. Return next week for another Tuesday uEtsy spotlight.