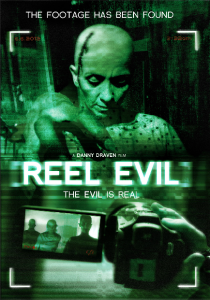 When would-be filmmakers Kennedy, Cory and James land a job shooting behind-the-scenes footage for a major motion picture, they think they’ve finally gotten the opportunity they need to fund their own project. But as all the bickering on the troubled set pushes them to explore the asylum the movie is being shot at, more and more strange things keep happening.

When I reviewed Killjoy Goes To Hell awhile back, I expressed a lot of excitement over the film. The brief teaser trailer was extremely well-made and made me think it was going to be a Lost Tapes-style anthology movie comprised of several short segments involving different mysterious disappearances. Sadly, this was not the case and Reel Evil is just another cookie cutter entry in the found footage genre that features many of the clichés and flaws noted in these videos.

I wish I could say those were the only problems I had with the film, but it packs in numerous plot holes and contradictions into its 78 minute running time. Well, 72 minutes not counting the credits that is. One of the first facepalm worthy moments comes early in the film, where the characters repeatedly stress that taking a job shooting a behind-the-scenes documentary for a film is the only way they can get the money they need to make their own film. Would it really have killed them to throw in a line about several failed crowdfunding campaigns making them desperate for a source of cash. After all, the film is supposed to be taking place in 2012. I was also amused to see that you could see camera glitches long before any supernatural events entered the picture (despite the opposite happening in most found footage movies). If they absolutely had to establish a glitchy camera beforehand, why not have a character comment on their shoddy equipment or chastise someone for not “blacking” a miniDV tape ahead of time. But it’s not as if the stuff they actually say in the movie is very consistent. The movie they’re working for is alternately said to be a low budget production and a major studio project (which curiously doesn’t have any big name stars). When the trio goes off on their own to explore the abandoned asylum, any concerns about getting fired for not being where they’re supposed to is brushed off as the firing being a good opportunity to use the footage they’ve shot for their own project. However, when the script needs them to interact with the film crew, they’re suddenly concerned about getting fired and risking losing their big payday! While I give the writers credit for trying to explain why so many of the rooms have light in them, it’s pretty ridiculous to think a production company would not only leave lighting rigs (and nothing but lighting rigs) all over an abandoned building, but that they’d leave them on as well! If the electricity bills wouldn’t shut the production down, the inevitable fire sparked by dust settling on high-intensity lights sure as hell would. Oh, and I love how the lead actress in a big budget film runs off to screw a grip. Right…

Come to think of it. I’m actually surprised they used Eric Roberts in The Dead Want Women instead of this movie. His presence in this film would have made the concept of a making-of documentary for a big studio film gone awry much more believable. Hell, they could have gotten some easy viral marketing going for the film by having a fake film project of his get posted on IMDB, only to have it mysteriously get pulled after news of mysterious disappearances gets posted there. Or, failing that, they should have reedited it into a comedy prior to its release. I can just imagine an introduction where Charles Band explains how Full Moon acquired some “real” footage that they deemed too boring to be released on its own and decided to make some “improvements.” Then at least people would have an excuse to openly laugh at the film.

Why the laughter? Aside from the terrible acting, there’s a ton of painfully obvious computer generated effects (including the worst cracked lens effect I have ever seen). There’s also some hysterically awful makeup on a homeless character that the protagonists briefly encounter. I’ve seen better makeup at elementary school Halloween parties! The makeup on the non-CGI ghosts is much better, but those are few and far between for the majority of the film. Instead we get shadow people, a ghost with eyes in its hands for some reason, and some admittedly cool tendril-filled fog. Why those last two types show up is never even explained, let alone hinted at (much like most of the ghosts’ motivations). I can understand that the ghosts kill people because they were murderous lunatics when they were alive and that, since this is a horror movie taking place at an asylum in a horror movie, the head doctor was conducting unethical experiments, but nothing else makes sense. There’s also no attempt at even hinting at a reason for why the asylum features the “shifting rooms” trope that has worked itself into the haunted house genre ever since House of Leaves and Rose Red came onto the scene. There’s even a sequence where the film’s producer angrily searches for the trio and repeatedly enters various doorways in a hall, only to come out from another one further down the hall. It might have worked as a brief scene, but it happens over and over and OVER again. It comes off as a bizarre Scooby-Doo chase scene homage, only devoid of any sort of humor.

The streaming preview I saw featured a widescreen transfer and great (aside from the intentional glitches) A/V quality. I understand the DVD, which is scheduled for a December 4th release, will also include a making-of VideoZone segment as a bonus feature. Based on the past Full Moon releases I’ve reviewed here, I imagine that the DVD will also include chapter stops (but no chapter selection menu) and some trailers. It’s a shame there isn’t an “in universe” feature explaining who edited the footage together and why it was released…

UPDATE: Boy is my face red! It turns out the trope I mentioned in this review is actually much older than I said it was. It definitely appeared in the 1963 film The Haunting (but I don’t know if it appeared in the original 1959 novel) and has been included in the Haunted Mansion attraction at Disneyland since 1969. Speaking of which, the decision to include shifting room effects was due to the ride being partially inspired by the Winchester Mystery House. It wouldn’t surprise me if this trope goes back even further!

Bad Behavior has blocked 1330 access attempts in the last 7 days.