Build Your Own Krampus Costume 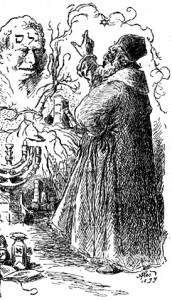 Every horror fan has at least a basic idea of what a Golem is. We’ve all heard the story of how a clay humanoid is brought to life by a rabbi (usually due to an inscription on or in the Golem’s head), thanks to it being recounted in so many books on monsters and horror movies. The same basic story remains more or less the same, despite the different legends. But despite that, misconceptions and stretchings of the definition of Golem have been on the rise for quite some time. Remember last year’s “Stone Golem” article? That title wasn’t chosen just so that I could use the “Golem” title this year. Despite the legend specifically referring to clay, many depictions of Golems in popular culture refer to beings made out of stone! Similarly, there was a period in the 80’s when the term was applied to artificially created biological life forms, like a cloned alien baby and a Frankenstein’s monster-style creation.

I suspect the reason for this is due to the influence of Dungeons & Dragons. Flesh Golems, Iron Golems, and Stone Golems were introduced to the game in 1975, with the traditional Clay Golem being introduced separately that same year. It’s worth noting how only the Clay Golem can randomly go out of control, while all other types of Golems don’t. Is it any wonder that the stone variant gained more popularity? The Flesh Golem should be very familiar to anyone who has seen Andy Milligan’s Monstrosity (or Frankenstein).

Interestingly enough, the most famous story involving a Golem (and the inspiration for the Clay Golem randomly going out of control), The Golem of Prague, isn’t as old as it is often claimed to be. Although claimed to be an actual legend from the 16th century, the earliest literary references to the event can only be traced back to the 1800’s! I bring this up merely as an interesting piece of trivia and not as a criticism of any kind.

After all, American folk hero Pecos Bill has similar dating issues, as does gothic fiction classic The Castle of Otranto. Without that last example, I dare say that the horror genre as we know it simply would not exist! So let’s not quibble over the date of origin for that one particular story and instead let’s celebrate it for helping popularize the Golem around the world. It may not be the first story to involve a Golem, but its influence on pop culture can never be denied.

Bad Behavior has blocked 1375 access attempts in the last 7 days.