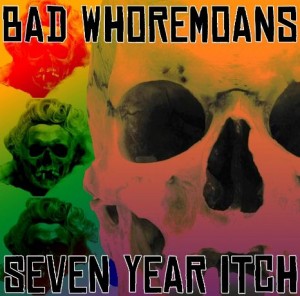 Dubbed a “gravest hits,” this album re-images past Bad Whoremoans songs. Fans of the band know that this is not new. The second release, ‘Say What Again’ offered a plethora of new songs but contained new versions of ‘Surf Nazis Must Die!’, ‘Lily,’ and ‘Graveyard Girlfriend.’ Selections from ‘Say What Again’ appear on ‘Seven Year Itch,’ with an improved version of “I Flatline,” a fuzzier rendition of “Casket Co.” and a new take on the holiday chesnut, “Black Christmas.” In total, there are four completely new songs ‘Seven Year Itch, –“Within These Woods,” “Deathproof,” “Vincent Price,” “World War Z,” — with versions of “Splatterhouse,” “Deep Red” and “Dead Rising” appearing on solo releases by Paul of the Living Dead as well as the Bad Whoremoans Lost Boys E.P. With all this information, it might be easy for the obtuse listener to write off ‘Seven Year Itch’ as a rehash, until they actually listen to the songs. ‘Seven Year Itch’ does not simply ‘improve’ but revitalize this body of work.

If the listener has an educated ear, ‘Seven Year Itch’ reveals itself as a deep inspection and intimate understanding where a band’s current sense of self stands. This release is a lot more personal than what one might comprehend at first look. By comparing the songs to their earlier incarnations, you can chart the progression of Paul of the Living Dead and the crew that joins him on his trip.

This time around, Bad Whoremoans is a optimized three-piece – Paul of the Living Dead on guitar and vocals, Robby Bloodshed on bass and Serial Bill manning the drums.  The slimming down of the roster shows. Some of the songs are faster and meaner—compare “Black Christmas” to the ‘Say What Version. Others show a grander production, like the newer “Haddonfield Horror.” The album’s greatest surprise is the slower, more dramatic version of “My Dead Girlfriend” that is honestly a beautiful song.

Nor are these musicians desperate. Each new version of a song shows development, a conscious change of how to make a rendition that honors the original composition while demonstrating a new sense of audible-growth while explaining where exactly stands the music mind of both Paul and the rest of the band.

You don’t even have to compare the new to the old. ‘Seven Year Itch’ is a great by itself and is a way to introduce new fans to the band or to give loyal listeners something special to enjoy.