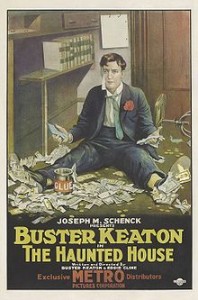 Not to be confused with the 1913 film of the same name, the film I’m discussing is the less obscure 1921 film by Buster Keaton. In it, Keaton plays a bank teller who finds his usual routine of workplace hijinks and pining for the bank president’s daughter interrupted by a bank robbery. Things go from bad to worse when a coworker (who’s in league with the robbers) falsely accuses him of being behind the scheme, prompting Buster to flee. But wouldn’t you know it…he ends up running to the criminals’ base of operations, which they have disguised as a haunted house in order to scare the police away!

Although the film starts piling on the gags from the get-go, I personally found the second half of the film to be much funnier than the first portion. Most of the jokes in that portion involve the aftermath of a glue spill and, although I can appreciate how the filmmakers tried to make the various jokes seem to arise organically from the spill, it just drags on for too long. This sequence, which is a retread of a similar gag in Keaton’s first film, was clearly intended to be the high point of the film (which is presumably why the film’s poster focuses on that scene instead of anything remotely spooky) but it just doesn’t do it for me. It’s a shame, because there is some good material to be found there, like the separation of two glued together men.

Things finally pick up once we’re treated to a very trouble production of Faust, which results in some of the cast fleeing to “haunted” house, which just so happens to be the same place that Buster Keaton is hiding from the law in. Did I neglect to mention that one of the actors is still wearing his Mephistopheles costume? Naturally,this leads to a several funny scenes where both Keaton and the disguised criminals get scared when they seemingly confront the Devil (who in turn is terrified whenever he sees the fake ghosts and confused about Keaton’s reluctance to speak to him). Buster encounters various ghosts, skeletons, a bat creature and other spooky characters during his exploration of the house and the film thankfully switches from jokes about him getting frightened to having him catch on and start to mess with the “ghosts” before it starts to get old. They come pretty close on overdoing the collapsing staircase (which is presumably why Keaton broke an ankle during filming), as you can tell they spent a lot on it and were eager to get as much use as possible out of it. Despite his reputation as “The Great Stone Face,” Buster uses expressions to great effect in this film. My personal favorite is the part where he takes advantage of his position as a bank teller in order to get an attractive customer’s phone number. The whole sequence is gold, especially the sly look on his face.

Being made at a time where films hadn’t quite made the jump to being feature length only, The Haunted House is only 21 minutes long. Although nowhere near as good as Keaton classics like Sherlock, Jr. it is an enjoyable film in its own right. Due to its public domain status in the United States due to it having been released before January 1, 1923, it can be found in numerous places online in varying states of quality. To my knowledge, the best available print of the film is the one offered by Kino International in the expensive “The Art of Buster Keaton” DVD collection and the much more affordable “Buster Keaton Short Films Collection: 1920-1923 (Three-Disc Ultimate Edition).” If you want a sneak peek, clips from it were used in the Buster Keaton music video that was previously discussed on the site.

Bad Behavior has blocked 747 access attempts in the last 7 days.