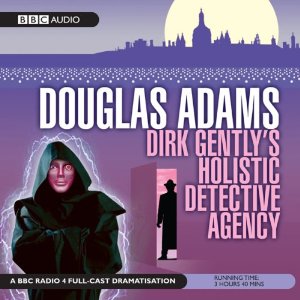 It all started with a missing cat. Wait, scratch that, it actually started long before humanity came into existence. But Dirk Gently’s case was to find a missing cat. Given his assertion of the interconnectedness of all things, he’s definitely the best man to see how a ghost, aliens, time travel and Samuel Taylor Coleridge (among other things) tie into the odd behavior of a college buddy of his. But he’d better hurry, because failing to solve the case will result in the destruction of humanity!

Despite being a Douglas Adams fan, I’ve never actually read any of the Dirk Gently books. I first became aware of his work after seeing copies of The Hitchhiker’s Guide to the Galaxy at practically every book store I visited as a child. I think it was the eyeless green thing sticking out its tongue on the cover that initially drew me to it. Eventually I wound up reading the entire series and just as I was preparing to get into the Dirk Gently books, my school workload increased to the point where I just didn’t have the time. And wouldn’t you know it, I completely forgot about the books when I finally had enough time to do so! Judging from what I’ve read online, there were definitely some alterations made in the transition from the printed page to the radio. I can’t say what exactly was changed, but I can say the acting is all top-notch and I thought it was a fun ride. That said, it was more restrained than Douglas’ work in the The Hitchhiker’s Guide to the Galaxy series. It’ll definitely tide me over until I can get my hands on the original novel. Sci-fi fans should be especially interested in how this story combines elements of two scripts he worked on for Doctor Who.

The complete six episode run of the 2007 radio series (twenty years after the novel was first published) runs a grand total of 3 hours and 40 minutes and spans across 3 CDs. As is often the case for multiple disc AudioGo releases, there’s some very informative liner notes packaged with the discs. It’s also worth noting that the CD release features extended versions of the episodes with material that wasn’t included in the originally aired versions. The series was successful enough to justify an adaptation of the sequel, The Long Dark Tea-Time of the Soul, which I’ll be covering next time…