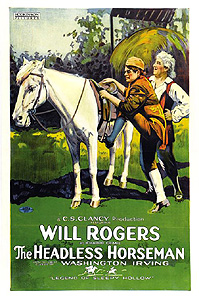 Everyone knows the story of Sleepy Hollow. Schoolteacher Ichabod Crane tries to win the favor of the wealthy Katrina Van Tassel while her jealous suitor Brom Bones schemes to get rid of his rival. Then one fateful night, Crane encounters the legendary Headless Horseman. Sounds like an easy recipe for a silent horror short, right? Wrong. The Headless Horseman is a feature film and almost all of its 70 minute running time is pure tedium. It would be one thing if they had used the short story’s “The Legend of Sleepy Hollow” title, but to call your movie The Headless Horseman and rarely use the title character is pretty ridiculous. Perhaps that’s why there’s a brief segment involving him about 6 minutes into the film. On the plus side, the skeletal hand prop in said segment is quite impressive and it’s better than having to wait for the film’s climax to see him. Title issues aside, the lack of the Headless Horseman wouldn’t be that big a deal if the rest of the film wasn’t so boring.

The majority of the film consists of people taking issue with Crane’s harsh methods and educated status (with Brom often fanning the flames) and the rival suitors’ attempts to win Katrina’s favor. Many of the comedic moments fall flat (although I was amused by Ichabod blowing off Katrina at a party in order to stuff his face) and the film has a bizarre tendency to focus on characters singing despite its silent nature. It also doesn’t help that the three main characters are so unpleasant. Crane is only after Katrina for her money, Brom is psychotic enough to try to frame Ichabod so that he’s covered in boiling tar, and Katrina seems more interested in stringing the two along rather than actually making a decision. Having been originally introduced to the character in animated adaptations, I was surprised to see the film portray Ichabod Crane as not being a complete coward and is in fact to rattle off ghost stories at the drop of a hat. There’s a scene where Brom has the schoolhouse trashed in order to make Ichabod think witches were inside during the night and instead of cowering like he would in your usual animated adaption, he immediately orders his students to clean up and uses it as way of telling them to behave!

As the film is in the public domain, there are several unrestored video releases available. As there is currently no restored version available, you’re probably better off just watching it online.

Bad Behavior has blocked 1247 access attempts in the last 7 days.