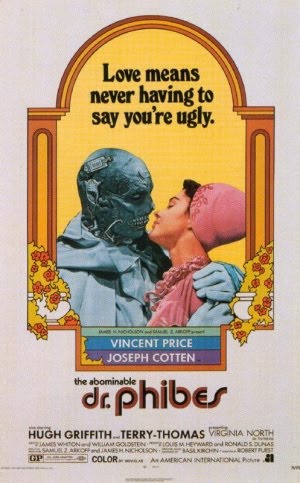 Yesterday was Vincent Price’s 101st birthday. So today, we wonder if he’s rolling over in his grave as the year-old news of a remake of The Abominable Dr. Phibes saw some life breathed into it. Maybe Vincent’s birthday had some intrepid monster kid google “Dr. Phibes” and saw the year-old HuffPo article about the rumored collaboration between Tim Burton and (suprise, motherfuckin’ surprise) Johnny Depp in a possible remake.

Maybe because Naughty But Nice Rob is that monster kid because he ‘broke’ the old news about the remake on Vincent Price’s birthday.  Perhaps celebrity gossip bloggers are the new horror outlets. I’m sure Perez Hilton had the scoop on the ‘Maniac’ remake. Hell, he probably knew about it before I did (I think my ignorance shows in the second or fourth episode of Heather Buckley’s Oddscurities, which you can hear on at 6’+, out podcast, at www.6ftplus.com)

IMDB doesn’t list any pre-production. Burton seems busy readying himself for a bio-picture entitled Bright Eyes, about the rise of Margaret Keane (whose husband, Walter, claimed credit for her popular paintings.)

This Phibes remake, if there’s any truth behind it, probably won’t come out until 2015 or ’16. IMDB says Depp’s currently filming a singularity movie, followed by a bio-pic about the creation of the FBI and a magical-fairy tale story, then the fifth Pirates of the Caribbean  movie. If anything, the movie won’t come out for a while and maybe by then, they might realize it’s a bad idea.

Though everyone panned Dark Shadows, it made a lot of money at the box office so Burton/Depp are still commercially viable. If this summers remake of The Lone Ranger flops, which everyone is sort of anticipating it to since it depicts Johnny Depp as Tonto and there was talks about were-bears and drugs, it won’t do anything to Depp’s reputation. He’s at the point in his career that a good group of the movie-going public will see a picture with Depp in it, no matter how much it obviously is a piece of shit.

So if Burton’s Bright Eyes is another Ed Wood where it’s historically inaccurate but still considered a good movie, Burton might have some momentum into doing another shitty remake with the same people he always works with.

It’s funny, since Burton commissioned Margaret Keane to do a portrait of Lisa Marie, the actress who played Vampira in Ed Wood before Burton decided to ditch her to go shack up with Helena Bonham Carter. It’s a shame Lisa Marie hasn’t had much of a film career, only recently showing up in Silent Night and The Lords of Salem, but after being kicked to the curb by Tim Burton, I can’t blame her for taking a break.

Still, Helena is a bit too old to portray Vulnavia, accomplice to Dr. Phibes. One has to wonder if Burton might cast some pretty young thing and end up a leaving Helena and the kids. See, I can be all gossip and shit as well.

The Abominable Dr. Phibes is a campy horror fest whose sense of humor would easily lend itself to the schlock-acting that has been the modus operandi of Buton and Depp’s collaborations. Their shtick would lend itself well in the revenge narrative of the original movie. The real reason that a Dr. Phibes remake is going to be horrid is not the people behind or in front of the camera, but the camera itself. Watch Dr. Phibes and look at the atmosphere that was done by the lighting alone. The gorgeous set pieces and the gritty texture of the movie won’t be recaptured with digital technology. The cinematographers and production coordinators are just as responsible for making Dr. Phibes as enjoyable as Price’s mugging or Peter Jeffry’s Inspector Trout. Plus, despite Phibes being an organist, the movie has some very sincere quiet moments, subtleties that will be lost due to a Danny Elfman soundtrack.

Anyway. There’s no real credence to any when, if ever, this project gets made. By the time it comes out, if ever it does, we’ll be done gnashing our teeth and eventually, we’ll get over it.  It’s unfortunate that Burton/Depp have gotten so repetitive that there’s no excitement or even the question of whether or not this movie would be GOOD. Perhaps if they worked on something original instead of trying to remake all the shit they saw as kids, I’d be willing to give them a chance. But, I’d rather go watch the original Dr. Phibes.

Happy Birthday, Vincent.  You’re getting a remake. At least no one is talking about redoing Theater of Blood.