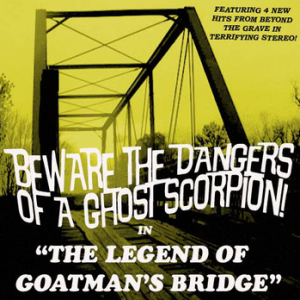 While there are many horror bands who wear masks and perform under aliases, none are nearly ass mysterious as Beware the Dangers of a Ghost Scorpion. One would think a band based in Massachusetts would be from that state, right? But the group claims to be from Denton County, Texas. There have been numerous hints the band is actually a group of teen delinquents called the Fishercats, who allegedly died in a car crash in the 60’s. Their Facebook page notes this live performance was their first since 2005 and yet they did not join Facebook until 2010. Whoever and whatever the band’s exact origins are remain shrouded in mystery. Only the following people know for sure and I doubt they’ll be telling any time soon:

The Legend Of Goatman’s Bridge was their debut album and they made one hell of a first impression. “We Welcome the Living (But Only If They Come Here To Die)” combines classic surf sensibility with raw punk grittiness. If there’s such a thing as “subdued bouncy,” then this is it. “They Won’t Stay Dead!” is the perfect blend of guitars and drums. Having a Night of the Living Dead reference for a name is also a plus. “Heads Will Roll!” is fast and furious; I especially love the atmospheric second half. Speaking of atmosphere, the slow guitars and evil laugh that start off “Goatman’s Bridge” are incredibly effective, which makes the transition to rollicking surf even better. It’s a great finish to both the song and the album itself. And get this: Not only does the bridge tie into their origin story, but it’s also a real place! 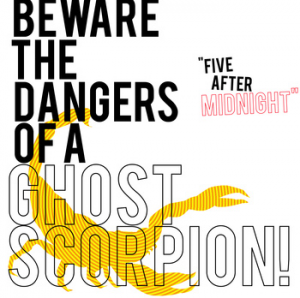 While some might give themselves a year before putting out another album, Beware the Dangers of a Ghost Scorpion released Five After Midnight the same year as their first album and there is no drop in quality. Percussion and reverb-heavy guitars immediately kick off “Denton County Casket Company,” which packs in a surprising amount of style changes. I don’t know if I should describe it as “crunchy” or “fuzzy,” but I know what I like and boy do I like this! The super speedy introduction of “Unforgettable Skull Deformation” grabs you by the throat and never lets go, not even for the brief slower paced interlude. The band’s surf influence is at its strongest in “Red River Tombstone Hustle,” but there’s still some punk feel. A mysterious voice whispers the title of “The Lurker” and its slow pace adds to its lurking feel. The moody saxophone work by guest performers Jess Fox and Scott Miller gives it an extra kick. Finally, “North Texas Cobra Squadron Theme” blazes right out the gate and beats you over the head with its greatness.

Beware the Dangers of a Ghost Scorpion offers a great combination of horror surf and punk delivered through tracks that never overstay their welcome. In other words, their stuff is definitely worth picking up. You had better believe there is plenty of pick up, as they been quite busy since 2011. 2012 saw the release of their live EP Trashy Bullshit and their first full length release, Blood Drinkers Only, came out in 2013. They recently appeared on the Monsters of Surf compilation from Ding Dong Records and unleashed a new EP called CAUGHT DEAD. So keep an eye on these guys, as I’m sure they have more great stuff planned for the future.

UPDATE: A new track called “Five After Midnight Original Broadcast” has been added to Five After Midnight. It’s a faux radio show which runs over 16 minutes and features all of the tracks from the album (some of which appear to be longer than the versions featured in the album itself). I love the backing music and sound effects accompanying the host segments and the fake ads are a scream. Best of all, the album’s current status as a “Name Your Price” download on Bandcamp means those who purchased the original release can snag the new track without having to pay extra! Well, unless they want to…

Special thanks to Beware the Dangers of a Ghost Scorpion for use of the images!