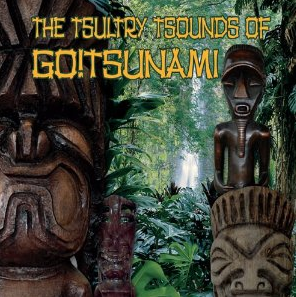 What can I say about Go!Tsunami that I haven’t already said in my first review of their work? As you may have guessed, this means I love the band and their follow-up to 2009’s New Wave Order is awesome. Let’s look at how I came to that conclusion:

“Tabonga!” is a name any fan of bad movies should recognize. Not only is it a reference to From Hell It Came, but the track even starts off with a sample from the film. There’s plenty of rockin’ guitars and soft, often (but not always) eerie organ work. Speaking of references, “Bad Day At Diamond Head” is named for the famous Hawaiian volcanic cone. Although things quickly pick up after the somewhat mournful guitar opening, the track’s overall serious tone remains the same (even when it goes from mournful to suspenseful). A sample of sirens and a call to dive kick off “Depth Change,” whose rollicking drums and guitars make for an exciting listening experience. The low key opening of “Siren Song” quickly revs up to give the listener a very catchy tune. There’s also a vaguely “Middle Eastern” feel at times. “Come in Xb-13” has a spacey opening and repeated calls of “Come in Xb-13.” I thought this was going to be about spies at first, but it appears to be a reference to a type of bomber plane. Which is appropriate since the guitars and drums really take off in this!

“Matador’s Revenge” offers a great combination of guitars and organ work. In addition to its overall Latin vibe, the closing has a classic surf feel to it. The soft and low key opening in “Cove of the Blind Fisherman” sets the pace for its relaxed and soothing feel. “Spies from Space” features fast paced and exciting guitar work backed by organs, along with the obligatory space sounds. There’s also an amazing guitar interlude and an overall sense of both intrigue and adventure. The circus music at the end flows nicely into the jaunty surf tune “Mole Men On the Midway,” “Return to the Cove” is quite the surprise due to its heavy use of Spanish guitar and whistling! But said surprise is a pleasant one, so I have no complaints. Although primarily a surf band, Go!Tsunami always has a Tiki shout-out. This album’s is called “The Moai Stomp” and it’s fast paced and heavy surf easily makes it one of my favorite tracks.

There are some people put there who argue a band’s follow-up album will never be as good as their first. The Tsultry Tsounds of Go!Tsunami is proof those people are wrong. The CD-R is also notable for being the last time Go!Tsunami member “The Fury” performed on an album. Although he has since parted ways with the band, the drum duties are now handled by one “Mr. Tentacles.” I look forward to hearing his work with the band. It’s been said they have been playing a new song called “Cthulhu Beach Party” at live events, so I doubt we’ll be waiting a long time for a new release.

Special thanks to Go!Tsunami for the review copy!