A silver bullet to the head. 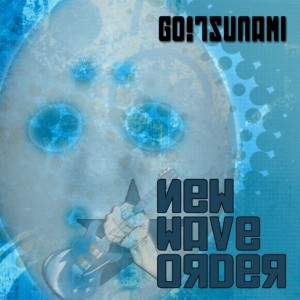 The exact origins of Go!Tsunami are just as mysterious as the hockey mask-wearing musicians that make up the band. Checking their official bio will tell you the band was formed in Springfield, IL and how the band consists of:

What isn’t quite so murky is the band’s style. Their special brand of “power surf” draws on a wide variety of influences, such as “hot rods, horror movies, long boards, tiki idols, beach parties, exotic islands, classic cars, pin-ups, cheap beer, and rum.” New Wave Order is the band’s debut album and let me tell you, they make one hell of a first impression.

You know you’re in good hands when you hear the classic surf sound (with plenty of reverb) that opens up “Rime of the Ancient Surfer.” The good times continue with “Camel Toe,” which features what appears to be a movie trailer sample and fantastic organ wor…oh, that’s gonna sound so wrong. “Midnight in Exotica” lets the group show that they weren’t just paying lip service to Tiki culture in their list of influences. While a lesser surf band might churn out a standard surf track and slap in a few bird calls to justify the use of the word “exotica” in the title, Go!Tsunami goes the extra mile. Simply put, this track is the perfect blend of exotica and surf. This mellow Tiki tune is nicely complimented by the reverb of the soft-yet somewhat speedy-guitars and features plenty of bird calls to boot. In “Go!Tsunami,” the percussion, organs and guitars rock just as hard as the band they’re named after. “Curse of the Flying Spider Monkey” starts slow, but quickly builds in both speed and intensity for a very catchy listening experience. The unusual clash of “Mermaid vs. Sasquatch” is depicted through a dueling organ and guitar which seem to represent each respective opponent. “40 Feet High and it Kills” is the name of the next song. Is it a wave? A monster? I honestly don’t know. What I do know is that this has semi-mellow surf feel despite its obvious connotations of power.

In “Pirate Prostitutes of the Peloponnesus,” a warped guitar opens for soft cymbals and slow surf goodness, which concludes with some excellent piano work. Despite the name, “Dia de los Dangerous” doesn’t have a “Latin” feel, but the deep sound definitely makes me think of danger. As any kaiju fan will tell you, “Matango!” is a reference to the classic Toho film. Although it has a soft open, but soon revs up to breakneck reverby goodness. Speaking of references to Japanese pop culture, “Mt. Midoriyama” appears to be a tribute to the series Sasuke (better known in the US as Ninja Warrior). The organ is clearly the star here, but the guitar work is nothing to sneer at. Regular listeners of our podcast might recognize “Hot Zombie” from its appearance in our zombie-themed episode. It’s fast, it rocks and it rules. ’nuff said. Although the opening guitars of “Bushwacked” start off with a “Latin” feel, there’s a somewhat “western” feel to rest of this track. “Painkiller” is fast and furious from the get-go and never stops. Ever. The sullen reverb at the opening of “Falcon 7” contrasts with the speedy energetic tone of the majority of the song, though it does go well with the organ and percussion work towards the end.

After listening to New Wave Order, I can confidently say there’s not a bad song in the bunch. While it is a CD-R release, the disc design and packaging scream “professional.” No bargain bin slimcases and inkjet-printed cover art here. You’d never guess this wasn’t a factory-pressed disc unless you flipped the disc over.

On a final note, I would like to note how the band is aware that their name might raise some eyebrows due to the unfortunate events in Japan earlier in the year. This is an unfortunate coincidence, as the name was in use years before the disaster struck. In fact, the group has worked to help raise money to help with tsunami relief. For more information about their relief work (and other concerts), please visit their Facebook page.

Special thanks to Go!Tsunami for the review copy!