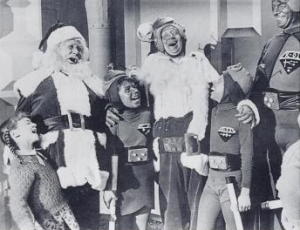 Filling a need for wholesome children’s films, Joseph E. Levine’s SANTA CLAUS CONQUERS THE MARTIANS, coming in Eastman Color Saturday to the Leathbridge Theatre, will be a welcome delight to many parents. This Embassy Pictures release will be presented under a special policy of Saturday and Sunday matinee performances only.

This unique science-fiction fantasy places Santa Claus in a futuristic setting and will intrigue and delight our modern-day space conscious youngsters.

Underneath it all lies the power of the Christmas Spirit and Santa Claus’s joviality. The children of Mars are so captivated by Santa Claus when they see him on television in a broadcast coming from the North Pole that their parents are determined to kidnap Santa to brightened their own children’s spirits.

Santa Claus is kidnapped in a space ship and is set up on Mars in a highly automated toy shop which will amuse young and old. How Santa returns to earth but leaves the spirit of Christmas at Mars is the content of the rest of the film.

The film’s story was conceived by Paul Jacobson, a former television executive, who has realized the need for children’s films in a contemporary context, and who has also produced SANTA CLAUS CONQUERS THE MARTIANS.

Featured in the cast are a host of professional Broadway and off-Broadway actors including many youngsters.

[This post is based around a prepared article included in the pressbook for Santa Claus Conquers The Martians. Normally articles like this are unchanged (with the exception of adding a theater name) in order to mimic how this would have looked in an old newspaper, but this is a special case. Sample scans from an eBay auction for the Santa Claus Conquers The Martians pressbook did contain the article, but it required enlarging the image and playing with the contrast in order to get something barely readable. After much eye straining and comparing against results found in online newspaper archives, a legible version of the text was discovered. It was also discovered how many newspapers opted to leave off the title and some seemingly deleted random sentences from the article itself! After much research and reconstruction, this is believed to be the most accurate representation of the original article. Even a new promotional photograph had to be tracked down since the ones in the eBay images were presented in a way which made them unusable. You can now see the film’s pressbook at From Zombos’ Closet.]