How To Make Cheap Foam Organs 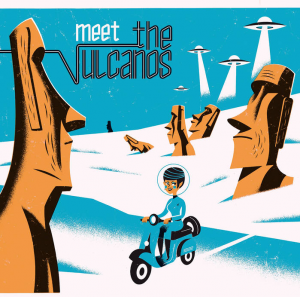 Hailing from Argentina (Buenos Aires, to be specific), the self-described “mod-surf-beat-garage” band the Vulcanos have a particularly interesting history. Formed from members of the defunct surf groups Los Vengadores, Los Transmisores and MODelo ´63, the band officially started in 2006. I say “officially” since two bands featuring some of the members performed together in 2002. With most of the information about the band not being available in English, that’s all I can say with 100% certainty. Their Facebook page gives the following lineup:

But other sources give the following:

I eventually had to gave up on using Google’s translation feature to help me due to poor results. I was tempted to give up, but the siren song of their great music and the awesome cover art by the famed Dr. Alderete kept pulling me back. Some names are clearly stage names but others make it unclear as to whether or not some members have left and been replaced. The second lineup is definitely the original and are the ones performing on the subject of today’s review, Meet The Vulcanos.

The somewhat laid back guitars and soft background percussion of “El super agente secreto” (“The super secret agent”) make for a great time. It’s like a driving scene in a spy movie that’s meant to show off the shooting location. “El rapto” is louder and more energetic than the previous track. Given how its name means “abduction,” this explains the somewhat sneaking, lurking tone to the guitars. “Te quiero” (“I love you”) offers soft and lightly sweet peppy guitar pickins’ while “Sheena is a Surf Rocker” is a surf take on a Ramones classic. It’s very pleasant and faithful, right down to the “Hey! Ho! Let’s go!” “Bruce Wayne Goes To California” is one of my favorites thanks to its medium (in both volume and speed) guitars with a touch of mystery…at first. Soon it really picks up and gets going, all while backed by steady percussion. The sounds of waves and great guitar work carry us through “Hawaiian Breeze,” which continue into “Reina del Mar” (“Queen of the sea”). Its use of an organ is a nice surprise and the overall effect is what would happen if a surf track was composed for The Adventures of Pete & Pete. You had better believe that’s a compliment!

“Curva de la Muerte” (“Death curve”) really picks up with some interesting variations in guitar work. The same goes for “Swamp Surf,” which only seems mellow when compared to the last track. It’s another another personal favorite of mine. “El asunto del agente c.i.p.o.l.” can be translated as “The issue of the u.n.c.l.e. agent,” but I think the most accurate translation is “The Issue of the man from u.n.c.l.e.” given how said spy series was known as “El Agent de C.I.P.O.L.” in Spanish-speaking markets. It’s fast-paced and somewhat jaunty while also including a sample from the show for added flavor. The surprisingly low key opening of “Bossanoville” carries through the entire soothing track. I love the cymbals in this. “Shockwave” starts off with some extra slow and soft reverb, but boy does it pick up! Our old friend the organ returns and a theremin also joins in! “Vulcanos Party” features cheers and the occasional breaking glass mixed in with some Vulcanos guitar greatness. It’s a party you’ll want to attend for sure. Drums really get to show their stuff in “Go!” That said, the guitars are no slouches either. Some classic surf touches and perfect use of a scratchy record make this a pleasant goodbye.

The Vulcanos’ sound is relatively quieter than most surf groups out there, which I think is a refreshing change of pace. It’s so great to finally have surf music which you can just relax to rather than the usual kind which bombards you with the urge to move. You can easily dance to it, but never feel forced to. It’s never boring, but how could a band whose influences include exotica, science fiction, spy stuff, etc. ever be anything but interesting? So if you are not intimidated by something that’s a little different, seek out the Vulcanos. Trust me on this, you will not regret it!

Special thanks to Scatter Records for use of the image!