It Came From Amazon IX 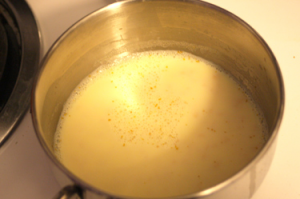 Now that we’re well into the season of pumpkin spice, let’s cook up some of My Ghoul Friday’s “Pumpkin Spice Latte.”

I had to take a trip in the Wayback Machine to get the recipe for Chef Ron Lock’s “Pumpkin Rot” cocktail, but the trip was well worth it! It’s sometimes referred to as a “Rotten Pumpkin,” but please don’t confuse it with Sasaki Time’s “Rotting Pumpkin Martini.”

But that isn’t the only martini recipe I have for you! There’s also Haunted Bay’s selection of recipes for various pumpkin martinis. They also have recipes for drinks like “Creepy Crawler Punch,” “Pina Ghouladas” and more! The “Pina Ghouladas” make me think of summer and that in turn makes me think of Mr. and Mrs. Halloween’s “Jack-O’-Melon Cocktails.” You’ll understand once you read the recipe.

Kathy Kalmar submitted her frosty “Witch’s Smoothie” recipe to The Giant Encyclopedia of Monthly Activities for Children 3 to 6 and I can think of no better companions than a small life’s “Slimer Smoothie,” Allrecipes.com’s “Green Slime Smoothie” variation and Food Network’s spinach-free “Slime Smoothie.” Yesterday’s collection of Ghostbusters recipes also inspired me to seek out recipes for Food.com’s “Slime Shake” and onthebar’s “Slimer” cocktail.

Jane Rocca’s “Venus Fly Trap” is an interesting concoction, as is DrinksMixer’s “Green Lizard.” Some of you might remember how I discovered this particular cocktail was used as the base for the “Godzilla” cocktail which was supposedly made as a promotional tie-in for Godzilla vs. The Smog Monster. That information being on Yahoo Answers initially made me unsure of its accuracy. But considering what 1001 Cocktails has to say about the effects of the “Green Lizard” and how it compares with description of how the “Godzilla” cocktail “clears that five o’clock smog from your brain” from the American pressbook for Godzilla vs. The Smog Monster, I’m now completely convinced that bit of trivia is correct.

But that isn’t the only cocktail promoting a movie I have for you! MacGuffins Bar and Lounge at AMC Theatres is offering a drink called “The Pennywise” to promote the new It adaptation. I have yet to find an actual recipe, but do know its a combination of pureed strawberries, club soda, Finest Call lime sour and Ciroc Red Berry. It also turns out another chain has created their own cocktail called “Carnival Chaos.” You won’t find a recipe at the link, but you can find a list of ingredients. Until either recipe shows up online, you can make due with the Bangor Daily News‘s collection of cocktails inspired by the works of Stephen King. If you make the the “Pennywise” cocktail, you can also use DrinkWire’s “Clown Mouth Garnish” to make it extra creepy. Horror Freak News has some cocktails inspired by American Horror Story and Spirit Cocktails’ “Indominus Rex” is inspired by Jurassic World.

To make up for the missing recipes for the It-inspired cocktails I noted earlier, I want to share some special bonuses with you! Pillsbury Halloween Fun has some tips on setting up a “Boo Bar” for your Halloween party and The Alcohol Professor’s “Night of the Booooozy Tales” has the man behind Teleport City pairing certain cocktails with famous scary stories. Teleport City was a major influence of mine and I hope you’ll all enjoy his article (and the Teleport City spin-off MEZZANOTTE) as much as I did.

Special thanks to My Ghoul Friday for use of the image!