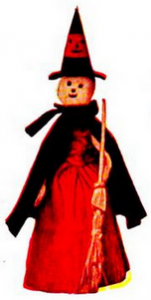 That witch looks good enough to eat. And with good reason, as it’s a “Witch Lollipop Doll” from Children’s Occupations by Mrs. Maude Cushing Nash. But it’s not just a lollipop dressed up to look like a witch. It’s actually a edible marshmallow head stuck on the opposite end of a lollipop which has been decorated to look like a witch! But if that doesn’t seem like enough of a recipe for you, then try combining it with one of the following recipes: Taste of Home’s “Old-Fashioned Lollipops,” Snappy Living’s “Homemade Lollipops” (made without corn syrup) or Hoosier Homemade’s “Homemade Jolly Rancher Lollipops.”

Better Homes and Gardens’ Halloween Tricks & Treats has recipes for goodies like “Eyeball Pie” and “Tombstone Brownies” (among several others). One of these other recipes which impressed me the most was the “Kooky Cauldron Sundae,” which only narrowly beat out “Scary Cerebrum.”

Speaking of ice cream, the October 1915 issue of Candy and Ice Cream has lots of Halloween ideas, including (but not limited to) the “Black Cat Sundae” and “Witches’ Dream.” The December 1919 issue of Pacific Pharmacist has recipes for a “Hallowe’en Sundae” and “Hallowe’en Sauce!”

Writing all those sugary recipes is starting to make my teeth hurt. Let’s move on to some savory items instead. Oh My Veggies’ “Pumpkin Cheddar Stuffing” sounds delicious, as does SheKnows’ “Spooky Ghost Pizza.” Woman’s Day has a recipe for “Dead Man’s Dip” and Kitchen Fun With My 3 Sons’ Halloween archives are filled with recipes for “Feet Loaf” and other monstrous meals. Halloween is Here also has quite a selection of spooky snacks you should definitely check out!