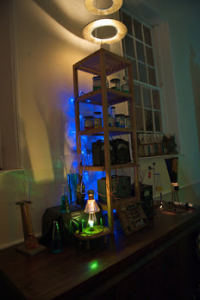 Bedford’s First Parish Unitarian Universalist has been running a most unique haunted house for many years. Although there were a few early versions of it prior to 2010, the “real” version of haunted house hadn’t been set in stone until that date. The overall theme is that guests are taking a tour through a school run by the Bedford Alchemist Society. Naturally the staff includes mad scientists, witches, wizards and members of the (fictional) Bedford Adventurers Club. But while it changes every year, events from the previous versions are occasionally referenced in a manner which doesn’t make new visitors feel as if they need to catch up. There’s a fair amount of humor mixed in with the horror as well. This is not a gorefest. This family friendly event focuses on atmosphere and scare tactics instead.

The haunt is always open for two days in October, with one day having special “Trick or Treat” time set aside for children. Things are much less scary and the First Parish Haunted House compares the experience to a G rated movie. But children still must be accompanied by an adult at all times no matter what day or time they visit. The rest of the operating hours are scarier, with Day 1 having been compared to a PG movie and Day 2 being even scarier. There’s also the optional “Deadford Dungeon of Doom” portion of the haunt featuring two advance warnings about the experience being given to those who were okay with the rest of the haunt. You’d better believe I opted for the scariest night and didn’t skip the dungeon segment when I visited in 2016. I briefly checked out the area set up for families to enjoy after visiting the haunt. Aside for some posters parodying classic horror films, the decorations are more “Harry Potter” than “Halloween.” This ties in both with the haunted house’s mystical school theme and keeps things enjoyable for young children. Kids get a free ticket for to play one of the various carnival games included with their admission fee. Everyone is free to buy more at the “Three Brooms” game area itself. There’s also food and beverages served by “The Cracked Cauldron” and merchandise (like “magic wands”) available for purchase.

The sight of the building at night is something which has to be seen in order to be truly appreciated. Purple lights are aimed up at the building and the front windows are filled with fake candles and Jack O’ Lanterns. There’s even a glowing ghost! Projections of spinning skulls line the sides of the building are both neat to look at and provide interesting lighting effects for a certain indoor portion of the haunt. The entrance is also on the side of the building, with the hay covered path covered by tents and colored lights. Please keep in mind how the entrance has been moved to the South Road side of the common for 2017 in order to accommodate landscaping on Elm Street. Parking is free at the church, although it can get filled up pretty quickly due to the attraction’s popularity. First Parish also works hard to offset the use of all the lights as part of their efforts to be as “green” as possible. They handle visitors in a very interesting way. You don’t just waltz in after purchasing a ticket. Instead you wait until a certain number of people buy tickets and then the group is admitted. I arrived at 7:00 and had to wait a bit as people trickled in. The costumed ticket sellers mentioned there’s usually a lull around that time (in contrast to being packed at other times). Although the dimly lit waiting room is small, there are plenty of decorations and custom posters to keep one entertained as people file in.

The combination of dim lighting, posters and decorations continues into the haunt itself. A vampire pointed us toward a white faced woman behind a podium. She delivered a wonderfully in character speech about the rules of the haunt, presented in such a way to make it seem perfectly natural to have such precautions in place at a supernatural school. This included reference to a séance gone wrong. Not only did this tie into one of the rooms of the haunt, but I’ve since learned it was also a reference to a scene from the previous year’s version of the haunt! I don’t want to spoil anything by providing the exact details of what I saw but will try to give you a rough idea of what to expect. Some portions were like interactive theater (including one part where you have to sit down, but this doesn’t happen every year), others were a guided tour of sorts and some portions involved getting surprised in dark areas. That’s right a guide doesn’t leads you through the entire attraction. You’ll often lose one guide and have another one pop in to take their place, but there are also parts where your group goes it alone. There’s plenty of lighting effects packed into the three floors of the haunt (including the stairs). There are admittedly times when your group might have to wait on the stairs until the group ahead of you moves to the next section. But to be fair, the guides did try to keep it interesting by conversing with the guests. There was one particularly entertaining touch I dare not spoil in case they repeat it each year. Thankfully the haunt also has alternative means of access for handicapped guests. There’s a mix of store bought, professional and homemade props in addition to the costumed performers. The “Mystic Oracle” prop alone was worth the price of admission and the steampunk version HAL 9000 was a sight to behold. As you might have guessed, its presence led to an amusing parody of the “Daisy” sequence from 2001: A Space Odyssey. Pointing out HAL also gives me an excuse to praise First Parish’s inclusion of references to classic literature along with the scenes inspired by classic horror and science fiction movies.

When my group reached the end of the main portion of the haunted house, we found ourselves in a dimly lit area where we’re told we can either take the stairs to the game room or take the elevator to the dungeon. Apparently this section is known to change names at times, but the presence of an especially scary downstairs area remains a constant at the First Parish Haunted House. It was interesting to visit a haunted attraction where the elevator actually worked (right down to the muzak) and wasn’t just a prop. Thankfully there were some skull masks and a creepy bellhop cracking jokes to keep the overall feel of the haunt going. The Deadford Dungeon of Doom was very dark and you could hear plenty of screams. It’s no wonder we got a second warning about its intense nature. Those who don’t want to go and can’t go to the game area can hang out with one of the staff members. Although there were some cool props and camo netting at the beginning, there were no decorations covering the bare white walls of the dungeon itself. Instead the twisting halls were filled with darkness, some lighting effects (including a strobe light) and creepy people. Thankfully this is not a situation where people only jump out at you. Some sit curled up on ground while crying and others sneak up you. Just like the main portion of the haunt, there’s plenty of misdirection in the dungeon. There are also some wonderfully varied methods they use to scare people in groups. I’d love tell you more about their scare tactics, but that would only spoil the fun. Be warned: these performers can SCREAM!

This is not to say there isn’t any room for improvement. There were some technical hiccups with the audio during the first “real” scene in the haunt. Similarly, it was hard to understand some of the dialogue from talking idols due to issues with their internal speakers. It’s actually possible to see into parts of the haunt in advance, both from the outside and from a certain area of the haunt. I caught a performer peeking out of a door they opened too early at one point as well. My enjoyment of what would have been an impressive projection effect was spoiled by some of said projection noticeably going off screen due to alignment issues with the projector (which they made an admirable effort to conceal). Finally, there were some parts of the dungeon used for quick scares that could have been used for more involved scenes or animatronics. Those would have added a little variety and could help make up for the undisguised white walls of the dungeon.

But, to be fair, this is an attraction run by volunteers and not industry professionals. They have a limited budget since the haunted house is intended to raise funds for the church and can’t pour ticket sales into the effects like the major haunted attractions can. This is especially important to factor in when you remember how they change things every year. I’m not even sure they’re allowed to put up black coverings or hang stuff from the ceiling in the areas I noted earlier. Please don’t let my highlighting of certain issues scare you off. Since I’m posting this before the event starts, they’ll likely address these issues and most (if not all) of said issues probably won’t be present at the haunt when you go through it. The haunt has 5 skulls worth of creativity and you would be cheating yourself if you passed on the opportunity. Picking a rating was difficult since I review these from a general scare seeker’s view and I suspect the experience would rate much higher with families. I’ve seen other haunts where they try doing different levels of scariness at the same time and this often results in bored parents trying to make children experience a level they aren’t ready for. The First Parish Haunted House wisely avoids this with different levels on different days, in addition to all of the warnings and opportunities for the unwilling to pass on their most intense segment. Throw in some humor and a family fun area and you have the makings for years’ worth of happy October memories!

Final verdict: 3.5 skulls out of 5 (with a potential for more if you’re visiting as a family)

Special thanks to the First Parish Haunted House for use of the image!

Bad Behavior has blocked 1238 access attempts in the last 7 days.