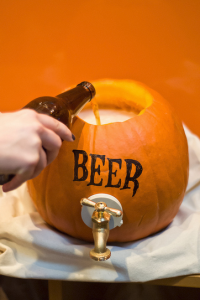 You’re probably wondering about the “Wormtown” part of this beer’s name. A Massachusetts disc jockey by the name of L.B. Worm came up with it in the 1970’s while working at WCUW in Worcester. Although it was intended as a reference to the area’s (then) massive underground music scene, it eventually become a nickname for the entire city. The people at Wormtown Brewery adopted it since it sounded cooler than just calling themselves “The Worcester Brewing Company.”

I had my first taste of their pumpkin ale at a birthday party back in 2015. We were at a restaurant specializing in draft beer and I made my order without realizing this fact. No bottle meant nothing I could photograph at home later for an article, hence my posting this now that I’ve found the perfect generic image to use in this sort of situation. It also meant I screwed myself by getting the glass rimmed with cinnamon and sugar. I had been hoping to sample the beer straight from the bottle first and then try some in the glass, but now I had to improvise. Drinking from the rimmed glass was nice at first, but they soon overpowered the beer’s flavor. A quick cleaning with a wet napkin got me back in business.

Looking back at my old notes, I referred to it as being “nicely neutral.” It has the perfect balance of flavor so that it’s not too sweet. The taste of pumpkin was pleasant while not being overwhelming. Although I’m sure cinnamon, allspice and other such ingredients were included, it was the pumpkin which stood out to me the most. It also tasted great with my burger and fries. It even went well with the spicy stuff I tried later. It’s a perfect middle of the road pumpkin beer to have with a meal. Especially if you’re the type of person who despises sweet pumpkin beers. Dogfish Head Punkin Ale seems like Shipyard Pumpkinhead Ale compared to this.

Trying to find more information about this particular ale has been surprisingly difficult. It’s definitely named “Wormtown Pumpkin Ale,” but all I can find is Wormtown’s “Fresh Patch Pumpkin Ale.” I haven’t had a taste of that particular beer yet, so I can’t say for sure if it’s a replacement or a rebranding. Others have similar questions and it’s nice to see I’m not alone in my confusion. For what it’s worth, Fresh Patch appears to be available in both bottles and as draft beer. But based on my experiences with Wormtown Pumpkin Ale, draft is the best way to go if you have the option.

The image illustrating this article was licensed under a Creative Commons Attribution-NonCommercial-NoDerivs 2.0 Generic License. The rest of the article is copyrighted by Gravedigger’s Local 16.