Revolting Reads (But in a Good Way) 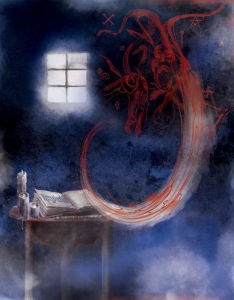 If you guessed this image has something to do with H.P. Lovecraft, you’re absolutely correct. It’s an illustration for “They Wait” by Jason Virgadamo (who also goes by the name Renfield Rasputin), a Lovecraftian tale which was chosen by readers of The Providence Journal as the winner of the H.P. Lovecraft Writing Contest!

Speaking of Lovecraft, William Meikle is another author who has received praise for his horror tales, both Lovecraftian and otherwise. His website has a fine selection of free tales, with Lovecraft-inspired works like “The Dark Island” in addition to regular horror stories like “Bait and Switch” and “Double or Nothing.”

Speaking of “double,” Robert Jackson Bennett and David Liss teamed up for an interesting take on soul selling called “Hollow Choices.” Of the numerous stories available at Deadman’s Tome, “Cry Baby” by Al Edwards and “Route 44” by David John Wing stood out the most to me.

“Interpretation of a Dream” by Gary Morton, “Dreams” by Paul F. Wilson and “Don’t Wake The Dead” by Drac Von Stoller all share a common theme. Can you guess what it is?

Pen of the Damned is home to many tales. It took a lot of time and thought, but I whittled my list down to a triple threat of stories to share with you. “Gus” by Nina D’Arcangela shows just how far some people will go to protect their Halloween display from vandals, Tyr Kieran’s “Secret Pain” offers a must-needed twist on the surprisingly popular abuse tale and “Carnival” by A.F. Stewart gives the standard creepy clown story a break while finding new ways to wring terror out of a carnival setting.

S.E. Casey has penned many existential horror stories, including “A Broken Oath.” But that’s not the only interesting new twist on horror stories for you! Remember Creepy magazine? It had many reader submitted prose works to compliment its horror comics. “Monster” by J.C. Bartholomew Galzo, “Image in a Puddle” by Paul G. Ellis, “A Very Lovely Ghost” by Randall Holmberg and “Him” by L.R. Slater all offer something different from the norm. Similarly, “The Undead” by Austin Sirkin has a steampunk take on zombies.

But sometimes more traditional horror stories are the way to go. “The Pumpkin Man” by Karpov Kinrade doesn’t try to hide the sort of story it is and it’s very enjoyable as a result. Speaking of traditional, Maria Leach offers her take on a campfire favorite in “The Thing at the Foot of the Bed.”

Readers of this site (and those who listen to our podcast) might be familiar with Chris Lambert’s audio work. But the man behind “Music For Zombies” is just as handy with the written word as he is with music. The Amazon preview for his book Tales from the Black Meadow includes “The Rag and Bone Man,” a story which has the feel of being an old folktale despite being a modern creation.

Both “What The Dark Does” Graham Masterton and “The Doll Wagon” by Daniel G. Keohane show the dark side of toys.

Ghosts aren’t always limited to old mansions and castles. As “The Gray People” by John Campbell Haywood shows, they can even be found on golf courses! Think of this as a pleasant palate cleanser for all of the horror you have just experienced.

Special thanks to angel f. matamoros for use of the image!