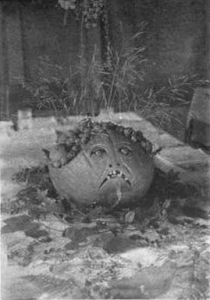 As I noted last year, several Halloween traditions were once associated with Thanksgiving in America. I first noticed this when I read A Tree Grows in Brooklyn back in high school and was completely mystified by the part where children were clearly trick or treating in November. When I noticed how several old magazine articles about Halloween were published in November while working on “More Vintage Halloween Insanity” in 2009, I was even inspired to write about my old high school memory for Thanksgiving that same year.

As the years passed, my research on various Halloween subjects would frequently lead back to Thanksgiving. The Dennison Manufacturing Company (which later merged with Avery International to become the Avery Dennison Corporation) once published “Bogie Books” filled with ideas for activities for Halloween…and Thanksgiving. Sometimes this was noted on the cover but often it would only become obvious after reading the contents. Judging from the various preview images, most of the Thanksgiving material seemed to be the normal sort of thing people today would associate with the holiday. So was this just a case of bundling Thanksgiving stuff into a Halloween guide since they’re both autumn holidays? Perhaps. But seeing turkey decorations and what appears to be a turkey costume shown in the Halloween suggestions hinted that something else could be going on.

Slowly but surely, more information about the matter trickled in while I was looking up other things. A 1912 issue of The Frances Shimer Record noted a “Junior Hop” Halloween party being held in November. This wasn’t conclusive, seeing as it could have originally been planned for October and then delayed, but was still interesting. The costuming guide for a children’s play about holidays suggested reusing an artificial Halloween pumpkin as part of a costume for the character representing Thanksgiving (although Halloween is strangely missing from the play) briefly made me think there was no real connection between the two holidays and that those Halloween articles were probably just the victims of poor scheduling. But it was what I found next which made me realize there might have been another reason. It was a note in a British book about poetry from 1875 which said Robert Burns’ “Halloween” “is always about the first days of November.” Attempting to learn more about this strange revelation led me to an entry from the journal of Queen Victoria! In an entry labeled “Halloween, October 31, 1866-1867” she noted how Protestants “generally keep Halloween on the old day, November 12.” Those who wish to learn more about the once traditional celebration of Halloween in November should pick up Halloween: An American Holiday, an American History by Lesley Bannatyne. Things only got more surprising when I came across an issue of Country Life In America from 1904. In addition to the pumpkin game and carved pumpkin chandelier, that’s also where I found the image illustrating this post! Considering how it came from an article about decorating suggestions for Thanksgiving, this makes the previously discussed costuming guide’s advice about keeping the face of the Halloween pumpkin concealed seem rather unnecessary. But since said guide was published in 1921, more investigation was needed.

An issue of Good Health from 1895 features a story about Thanksgiving in which pumpkins play a large role. Not only are Jack O’ Lanterns carved in it, but Jack O’ Lantern crafts are made and pumpkins are treated as the symbol of November on a calendar. The calendar page for October is instead illustrated with apples, corn and nuts. This might partly be due to Halloween once having been referred to as “Nut-Crack Night.” Also note how my source for that particular fact treats cabbage as the symbol of Halloween! The 1899 book Our Little Tot’s Speaker by Annie Pavey includes “Out For A Walk” and “How The Pie Grew,” two poems which connect Jack O’ Lanterns with Thanksgiving. The November 1902 issue of American Kitchen Magazine shows that carving pumpkins after Thanksgiving dinner was once a perfectly acceptable activity. In 1905, Herbert B. Linscott’s Bright Ideas for Entertaining describes a “Thanksgiving Sociable” with ghost stories, Jack O’Lanterns and other things commonly associated with Halloween. Harper’s Bazaar described a “characteristic Thanksgiving table” decorated with Jack O’Lanterns in 1907 and a “Jack O’Lantern Drill For Thanksgiving” was available for sale the following year. Although Winnifred Shaw Fales’ and Mary Harrod Northend’s The Party Book recommends omitting faces from pumpkins when making Thanksgiving decorations in 1912, other sources suggested otherwise in 1914 and 1921.

So why were Thanksgiving Jack O’Lanterns considered inappropriate in 1912 and 1921 but were acceptable in so many other years? Furthermore, why did the tradition stop? I suspect it’s due to a mix of things. Personal preference and differences in regional traditions could explain why some supported the carving of pumpkins on Thanksgiving while others didn’t. Another factor is how American holiday traditions are constantly changing, if not jumping from one holiday to another. For example, Jack Frost was once linked to the fall season despite his current association with winter. Snapdragon was a game which has been associated with both Christmas and Halloween before falling out of favor entirely (presumably due to safety issues). While we think of it as a New Year’s song today, “Auld Lang Syne” was once considered to be a perfectly acceptable song to sing at Halloween parties. Although this might be linked to Halloween having once been promoted as being Scottish in origin. Even today we see what would once have only been referred to a “Christmas lights” being sold for use on Valentine’s Day and Halloween.

Halloween: The History of America’s Darkest Holiday by David J. Skal takes things a step further by not only noting how the tradition of giving candy to children on Halloween partially arose as a way of keeping children from vandalizing property, but notes its connections to other, similar traditions. He also notes how an early example of a carved pumpkin in America is a Thanksgiving-related magazine cover from 1867 and also looks at the association of Jack O’Lanterns with Halloween. His discussion of the vandalism prevention aspect also notes how the Thanksgiving equivalent of trick or treating was extremely popular in New York and how the tradition was both inspired by and fell out of favor due to parades. The Great Depression and pressure from schools also killed off the tradition. The concept of trick or treating on Halloween as we know it really took off once sugar rationing ended after World War II and allowed candy companies to play up the connection in advertising. That’s only the tip of the iceberg of information contained by the book, so I highly recommend that you seek it out.