Music to Haunt By: Icky Ichabod

Music to Haunt By: Morbus Tenebris 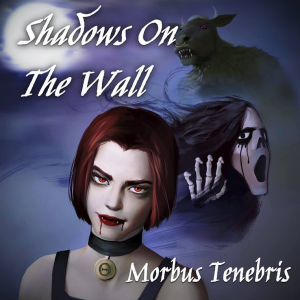 You might remember Benjamin Fouché as the man behind Spookinite Valley. This year marks his debut novel, Shadows On The Wall. This year also marks his musical debut with a tie-in album for the novel under his side project, Morbus Tenebris. It’s a story of a haunted house-themed sideshow attraction called “Gravestone Manor” whose facade artwork delivers exactly what it promises. Sadly its monsters and supernatural beings are all too real…and all too deadly. They also have the ability to leave the attraction! It has claimed many unsuspecting victims as it materializes in various carnivals and fairs and the novel tells of the protagonist’s life being forever changed by three beings from the attraction: The spectral Funereal, the monstrous Odious and the vampiric Luminita. I’ve only had a chance to read a little of it and it’s kind of like if H.P. Lovecraft got sick of tentacled horrors beyond imagination and decided to write about a haunted attraction that’s truly haunted.

The version of Shadows On The Wall I’ll be reviewing is actually the remastered reissue. The original was released earlier in the year with different artwork, different mixes and even a few different tracks. Mr. Fouché eventually came to the conclusion that the artwork was too cartoonish and he became dissatisfied with the quality of the music. It took some time and money (and a new artist), but he was pleased with the final results. He even created some new tracks to replace those he felt couldn’t be salvaged. These new tracks are “Sanguivoriphobia”, “Nocturnal Wandering” and “Gravestone Manor”. I only bring this up as an interesting bit of trivia, as this sort of thing is far from unheard of in the world of haunting ambient music. After all, both Prelude to a Nightmare and Verse 13 have replaced cover art and swapped around tracks for their old albums. But I’m getting off topic…

Creepy organ music takes us into “Lost at Midnight.” It offers lots of variations until it briefly stops and takes on a grander (and vaguely circus-like feel). The use of soft wordless female vocals and the constant tolling bells near the end were great touches. “Shadows on the Wall” also has a grand feel thanks to its soft piano work, mysterious strings and pipe organ work. Tolling bells briefly join in to contrast with piano. Fans of string work will particularly enjoy this track, especially the solo segment. This eerie track is perfect for a haunted mansion. “Mural of Horror” uses mournful strings and wordless female vocals to create a creepy, almost mystical feel. There’s also some nice use of heavy piano work towards the end. But don’t think you’re limited to using this with scenes involving witches and wizards. Halls of portraits and graveyards would also benefit from being paired with the track. You could also use “Midway Memories” with a graveyard scene due to its sad and dismal feel. It’s a combination of both heavy and light piano work mixed with violins and occasional blasts from a pipe organ. Its circus midway feel isn’t “in your face” and sometimes vanishes from the track, so let’s use it in an area where that works to its advantage: a haunted sideshow. After passing the signage and ticket booth, guests enter a room with several displays. In addition to the “FeeJee Mermaid,” they can also see exhibits like strange fossil, a skeletal human spider, creepy things in jars and a caged gorilla. Said gorilla’s cage is directly across from the exit so it can chase people into the next room when it escapes. The dark tones and interesting string work of “Sanguivoriphobia” remind me of a predator surveying the area. Although the title refers to having a fear of vampires, you can use it with any monster scanning your haunt for victims.

“The Vampiress” is appropriately elegant thanks to its harpsichord work and dark tones. The harpsichord and tolling bells pick up for an interesting change of pace later in track. It’s interesting how some of the musical tones sound like vocals but actually aren’t. The winds down until only music box chimes and “vocals” are left to fade out. It could be used in the lair of a vampire or vampiress, but I have another idea. Haunt visitors enter a room with a table in it. There is a vase filled with white roses and a ghoulish woman enters to water them. But then the flowers start bleeding as soon as she does! This works best for home haunts which don’t get many visitors, although you can create lots of flowers in advance (and have some hidden cleaning supplies ready) if you want to do this for a more popular haunt. Having a place mat of sorts under the vase would help too. But don’t throw the bloody roses away! If they are carefully dried and properly modified, they can be used as a different kind of prop next year. “Nyctophobia” means the fear of darkness. Its pulsing string work and dark tones create a sense of unease and dread. Other portions have a grand feel and brings the style of Midnight Syndicate to mind. The occasional pounding tones adds to the overall mood and creates a feeling of pursuit. The ending must be experienced to be appreciated. A chiming music box melody opens “Nocturnal Wandering,” only for piano work and musical darkness take over. Moaning tones lead to an amazing violin solo. Although the other elements return, a music box solo closes things out. This means haunted playrooms and circuses can both use this. “Immortal Nightmare” breaks up its harpsichord stabs with great variations of organ work and heavy backing piano. “Dark Remembrance” offers dark, heavy backing tones and wordless vocals while “Odious” has a gradual build to a sweeping feel thanks to its use of strings and heavy backing tones. I loved the use of horror stingers. The only constant is its use of sweeping strings to conjure up the sense of something stalking. Any haunted forest or dark maze would benefit from this. “Blackened Heart” changes things up with a contrast of moody, speedy piano work and heavy pounding piano notes. A new tolling bell effect is heard and a pipe organ bursts in for good measure. I also loved how some notes are held for long periods of time.

“Teraphobia” is our final phobia, the fear of monsters. Like some of the other tracks, it mixes driving strings, tolling bells and uneasy backing music. But its special blend of warped, twisted music gives this track its own unique identity. I found some aspects to be mildly comedic, so there’s clown potential here despite the pipe organ and bells. Why not have a creepy clown throw knives at a spinning victim as this plays? The harpsichord work and backing organ of “Funereal Apparition” are constant, but the bells and chorus of wordless female vocals come and go. Its sense of ancient elegance makes it the ideal soundtrack for funeral parlors and haunted throne rooms alike. “Gravestone Manor” makes truly unique use of the piano and harpsichord. There is some incredible musical work on display here which you have to experience in order to understand. The wordless female vocals are enhanced by the harpsichord’s creeping feel. The addition of a pipe organ later on also helps the mood. “Shifting Darkness” definitely lives up to its title and makes it seem like something lurking about in the dark. The piano work in “Luminita” is vaguely like Halloween theme for the opening, but it quickly takes on its own identity. Its piano riff is both steady and constant while the strings are varied. The nice musical layers keep it from getting too repetitive. “Disquietude” begins with plinking music box chimes. Heavy strings and dark tones join in, as does the organ. There are some astounding speedy variations by these instruments later on. Although it fades down to just the music box and strings for a bite, the others return for the finale. I appreciated how this had a natural rather than sudden stop. It’s a natural choice for a haunted nursery.

Morbus Tenebris has made a great first impression with Shadows On The Wall. Speaking as someone who’s heard both versions of the album, I can vouch for this being the best of the two. All tracks are suitable for individual looping, so haunters and Halloween fans who pick this up will have a wonderful selection of material to choose from. Although I’m sure there are some Halloween displays with which this entire album could be looped, it seems likely other purchasers will pick and choose select tracks if they don’t have any clowns or spooky dolls in their Halloween displays. Interested parties can obtain it in either CD or digital download form. Here’s hoping we see more releases from Morbis Tenebris!

If you’re wondering about my earlier use of the term “haunted house-themed sideshow attraction,” you’re not alone. I too was intrigued by the the unusual description back when I saw it on the original Morbis Tenebris website. The author was kind enough to explain that he was paying tribute to the early days of carnival haunts, which were often exhibited like sideshow attractions. He also let me know he used the name “Gravestone Manor” in tribute to a haunted attraction by that name which he often visited at a local annual fair. The artwork had enthralled him as a child and the supernatural characters in the novel are a tribute to the types of things depicted on the airbrushed facade. Speaking of which, it turns out said artwork was not present on the original version and the facade art (and name) were changed many times before it was sold off. He had scoured the internet for a picture of the “Gravestone Manor” version and was unable to find anything. So if you have a picture of it, be sure to let him know!

UPDATE: Benjamin Fouché has since found some photographs of the real “Gravestone Manor” dark ride and is no longer interested in receiving any more pictures of that attraction.

Special thanks to Morbus Tenebris for the review copy!