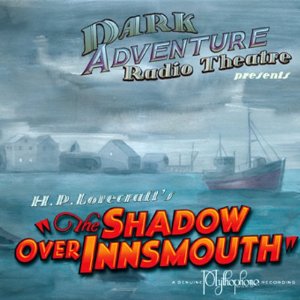 You might remember the H.P. Lovecraft Historical Society from my “Printable Halloween Décor” article or for their 2005 silent film, The Call of Cthulhu. Just as that “Mythoscope” film was designed to look like a 1920’s silent film (as the original story was written/published then), their Dark Adventure Radio Theatre CD series seeks to adapt Lovecraft tales in the style of old-time radio shows. To date, the series has adapted At the Mountains of Madness, The Dunwich Horror, The Shadow Out of Time and The Shadow Over Innsmouth.

The Shadow Over Innsmouth is a tale of one man’s harrowing visit to a strange seaside (and mostly fictional) town in Massachusetts. The odd-looking inhabitants are very suspicious of outsiders and fiercely secretive about the practices of their religion, the Esoteric Order of Dagon. Rumors of the townspeople making sacrifices to and interbreeding with sea demons turn out to be more than the ramblings of the town drunk…

The HPLHS has put together a simply amazing audio adaptation in the grand tradition of horror-themed radio shows like Lights Out, Quiet, Please and Inner Sanctum Mysteries. Thanks to the acting and authentic-sounding opening sequence, one could easily pass this off as an episode of an obscure radio series to an unassuming listener. That is, until they get to the humorous “1931…plus 77” copyright notice. The tongue-in-cheek ads for the nonexistent Fleurs De Lys brand of cigarettes (a staple of the Dark Adventure Radio Theatre dramas) are an amusing callback to the days when cigarettes were supposedly good for you.

In order to make the story more suitable for the radio play style (and too add more dramatic impact than the lead simply reading the story), some changes had to be made. Whereas the original story frequently has the protagonist recap events and conversations he has, the audio drama opts to dramatize them. Similarly, the start of the play now features a fake clip of a radio news story on and interviews with the FBI agents raiding Innsmouth rather than the original’s narration about the events, which may remind listeners of Mercury Theatre on the Air’s infamous broadcast of The War of the Worlds. A framing story featuring an FBI agent interviewing the protagonist has been added to make the story end with “more of a bang,” as noted by the production blog. Occasionally, extraneous lines that didn’t add anything important from the story have been left out. This was most likely done to allow the audio to fit onto a single CD and only the most anal-retentive purist would be bothered by this. Truth be told, I only noticed their absence after the CD inspired me to reread the original. As for the running time, The Shadow Over Innsmouth. clocks in at a little under 80 minutes, comparable to the length of the average feature-length film.

The acting and music are both top notch. The conversations all sound natural (or as natural as you can get with Lovecraft’s purple prose) and the rural Massachusetts accents are dead-on accurate. The actor playing Robert Olmstead will amaze you by how easily he can transition between the world-weary man tortured by what he has experienced at Innsmouth and the cheery, chuckling student he used to be. I was also impressed by the use of old-fashioned pronunciations for words like “roof,” which led to one person who overheard the audio play into thinking it was Canadian! Composer Troy Sterling Nies has put together a terrific score, which effectively enhances the both mood and sound effects. Their well-timed, minimal nature of the effects provide a sense suggestion that Lovecraft himself would have approved of. Given Lovecraft’s low opinion of this particular story, he might have even approved of the alterations made for this particular adaptation.

The Shadow Over Innsmouth comes with informative liner notes about the genesis of the story. As it turns out, the name “Robert Olmstead” was never used in the story and the name was found in H.P. Lovecraft’s old notes on the story. On top of that, the CD comes with an assortment of props similar to the “feelies” that came with old Infocom text adventure games.

The props include a “Newburyport Historical Society” postcard depicting some Innsmouth jewelery, a book of matches from the Gilman House Hotel (with a single unused match), a page torn from an old newspaper about the FBI raid, and a fish-scented scratch and sniff map drawn on First National Grocery paper. Like the liner notes, a lot of hard work and research was put into these. The actual logo and slogan from the now-defunct First National chain are used for the map and the fake newspaper clipping draws its design from the New York Evening Graphic, an out-of-print tabloid from the era. And if you carefully removed the custom security sticker, you also get an Esoteric Order of Dagon seal!

All in all, the props are very cool and do help the listener get a better connection to the story. Home haunters probably won’t have much use for them and would probably prefer the occult tome pages from the The Dunwich Horror and The Shadow Out of Time installments of the series. The props could also be used in a Lovecraft-themed RPG (be it tabletop or live action) or left where a Lovecraft neophyte could stumble upon them as a gag. Like the Infocom feelies, they can be thought of a a kind of copy protection (after all, you can’t torrent a scratch and sniff map). I also suspect they are the result of the HPLHS’ origins as a LARP group. Speaking of which, the Fate of the Ancients episode mentioned at the end of the play is a reference to one of their old gaming sessions. Only time will tell if that adaptation will really happen.

Special thanks to the H.P. Lovecraft Historical Society for the review copy!