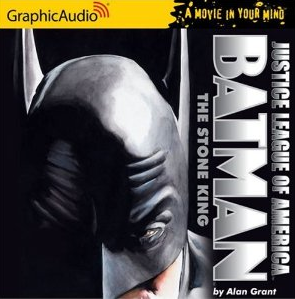 From his appearances on The Adventures of Superman radio show to the numerous “record/tape and comic” releases, Batman has always had a rich history in the world of audio dramas. The latest company to contribute to this legacy is Graphic Audio, with their series of adaptations of novels starring DC comics characters. Some of his appearances are as part of major crossovers, some are solo adventures and the Justice League of America dramas have him as a supporting cast member. Said dramas tend to focus on a single League member, although others argue that these are just JLA stories with a single member promoted on the cover. In this case, I’ll be looking Batman: The Stone King, based on the novel of the same name by Alan Grant.

Why is a horror website reviewing a comic book themed audio drama? Well, let’s look at the plot: a mysterious pyramid is unearthed in Gotham City in the aftermath of a dam burst. Said pyramid is filled with symbols associated with black magic. Needless to say, an ancient evil is unleashed and Batman is the only Justice League member left uncaptured as the entire world is in peril. Horror fans might also appreciate the interesting insights on the nature of fear that are sprinkled throughout the plot. Be warned, as there are minor spoilers ahead…

Batman: The Stone King, is definitely not something you can play for kids (like the above mentioned record sets). People die (often in gruesome ways) and the gory events are described in graphic detail. Parents probably wouldn’t want the little ones to hear the flashback to two characters having sex, either. It’s nothing explicit (and only lasts seconds since the characters get interrupted), but still.

Although the idea of a non-powered superhero taking on a supernatural foe that managed to defeat the likes of Superman and Wonder Woman might seem outlandish at first, the story actually handles it in a believable manner. I won’t spoil Batman’s plan, but I will note that it takes advantage of the fact that the disembodied shaman needs a human host.

I enjoyed the way the Stone King is handled. Rather than immediately springing into action the second the pyramid is unearthed, Grant wisely chose to have the villain remain inactive until his chamber is disturbed. Similarly, the Stone King uses his powers to test each League member’s abilities before making his move. Even after he’s captured everyone but Batman, he doesn’t rush into his plan to “cleanse” the planet and instead makes sure everything he needs is in place.

Although the JLA does play a good-sized role and each member gets a “chapter” dealing with the Stone King’s test of their strengths and weaknesses, this is still Batman’s show. Most of the plot is about him and it’s his plan that ends up saving the day. Not having read any comics since the mid 90’s (and I was pretty much a “Marvel Zombie” then anyway), I can’t offer much insight as to the characterization of the heroes other than what I’ve gleaned from their TV and film appearances. Everything seems fine to me in that department. There are a few minor plot holes, but they’re nothing too major. For example, the old sewer Batman travels through at one point should have been destroyed in the major earthquake that struck Gotham (which is even mentioned in the drama).

However, there were other occasions when the seeming errors actually weren’t. There were times I thought “I don’t care if the Flash was caught by surprise, he shouldn’t almost get punched by a normal person” or “There’s no way Wonder Woman would have trouble handling a group of zombies,” only to find out later in the story that the Stone King grants superpowers to those he controls.

But let’s get to the question on everyone’s mind: how well does this work as an audio drama? After all, comics are a visual medium and a novel is already one step away from that. Some parts worked better than others and some aspects took awhile for me to get used to, but all in all I’d say it was a good ride. Graphic Audio’s “Movie in Your Mind” format is a hybrid of an audio book and an audio drama: A narrator describes the action while actors perform characters’ dialogue, combined with music and sound effects. Having first been exposed to the H.P. Lovecraft Historical Society’s The Shadow Over Innsmouth audio drama, it took me quite some time to get used to this. I suspect this won’t be as much of an issue for you if you have either only heard audio books or have never listened to audio books or dramas. I found that doing something else while this played in the background or listening while feeling a little tired made it easier to visualize the story. The music and effects were all top notch; I’d gladly pay for a soundtrack CD. Judging the voice acting is hard in the sense that the “right” or “wrong” voice for a character depends upon the listener. In my opinion, the only truly wrong voice was the one used for Commissioner Gordon, as it would seem more appropriate for a comic relief character. This is in terms of the voice only, each one of 27 cast members were great actors/actresses. I thought the voices used for Wonder Woman, the Flash and Martian Manhunter were great. I was unsure about the ones used for Batman and Superman, but I got used to them after awhile. However, if Superman is supposed to be an older, world-weary version of the character, then the portrayal here is dead-on perfect. The titular Stone King sounded very creepy and menacing, although the effect is occasionally spoiled in the (rare) instances when he briefly lapses into a vaguely Russian accent. But otherwise, he’s very scary. “Terrify your friends by suddenly turning off the lights and playing one of his rituals” scary. Do not let my attempts at being thorough fool you into thinking that I disliked Batman: The Stone King. On the contrary, I had a great time listening to it and I have far more problems with the sleeves used to store the discs than I do with any aspect of the drama itself. If anything, this release has increased my enthusiasm for audio dramas! Getting back to the sleeves, I wish they had included a hole of some kind on the top side in order to make it easier to remove the disc inside.

Speaking of discs, the story is spread out over six discs, with a running time of about an hour per disc. The long running time is due to both the drama being unabridged and because the company’s target audience is largely made up of people on long road trips. Speaking on someone who has been on many a long, boring vacation drive, this makes perfect sense to me. Come to think of it, I could have easily polished off a disc per day during my old commute. If the thought of swapping discs doesn’t sound appealing, Graphic Audio also offers both a single disc “.mp3 CD” version and an .mp3 download. I should also note that the multiple disc editions use CD-Rs, presumably to keep the cost of a multiple disc release under twenty dollars. They are not unauthorized bootlegs, as they’re licensed by DC Comics. These are professionally done CD-Rs with metallic tops and the title printed on them, so don’t expect some homemade job with stuff written on in marker.

I definitely recommend checking this (and other audio dramas) out and hope you’ll at least listen to the preview for it. Horror fans might also be interested in Justice League of America: The Exterminators, The Flash: Stop Motion and the upcoming DC Universe: Trail of Time (wherein Superman teams up with a variety of supernatural and western-themed characters, including Etrigan the Demon and Jonah Hex). Or for those who prefer non-comic book horror, there are titles like The Destroyer: Deadly Genes and The Demon Wars Saga.

Special thanks to Graphic Audio for the review copy!