My Own Easter Egg

This Is Just A Tribute 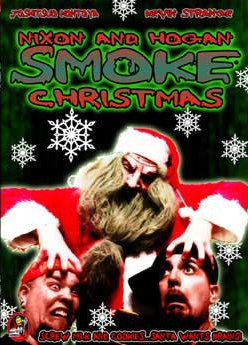 When the Nixon and Hogan Smoke Christmas screener came in the mail, I was psyched. The accompanying promotional material described a plot about two stoners’ Christmas wish for marijuana going horribly wrong when Santa accidentally brings some zombie weed instead. As if Santa turning into a zombie wasn’t bad enough, Nixon and Hogan have to juggle finishing Santa’s delivery route and keeping Sasparilla the Weed Witch from stealing Santa’s magic!

Further online research had told me the production company specialized in gory, over-the-top low budget horror comedies set in Strangeville. “Cool, so it’ll be like a Troma movie” I had thought. Perfect to watch with my brother and our visiting from out of state cousin (who loves Troma films), right?

This review is based on a DVD-R screener. A/V quality and features might not necessarily reflect those of the actual release

The official slogan for Hack Movies is “Where Comedy Punches Horror in the Nuts” and truer words were never spoken. Nixon and Hogan Smoke Christmas is more of a comedy than it is a horror film. Although the movie has a warlock, pumpkin monster, interdimensional fish-god and tentacled pig demons (along with the previously-mentioned witch and zombie), they only make scattered appearances for the majority of the film. Zombie Santa looks more like a diseased old man than a zombie (although it does suit his characterization as a dirty ol’ perv) and only eats one brain. Certainly not the zombie rampage I was hoping for.

As for the comedic stuff, your mileage may vary. You had better love blatant plugs for the company, along with the terms “piece” and “Colombian smoke weed,” because you’ll be hearing them a lot during the course of the film. And nothing makes a 72 minute runtime feel like hours quite like numerous scenes of pot smoking and masturbation. Long, unmoving shots of guys pawing at their groins while squishy sound effects play. I apologized to my fellow viewers a lot due to stuff like that. Remember, we had all seen our fair share of Troma movies and I’m a huge Puppetose fan. And yet this movie still made us cringe.

But that’s not to say that there weren’t parts that we enjoyed. While most of the cast over or under acted (done on purpose, I’m sure) too much for our tastes, there were a few whose performances we liked. Of these, the actors playing Santa and the “Marvin the Martian”-sounding Mortok the Warlock both gave perfect, hilariously over-the-top performances. You’re practically guaranteed laughs every scene they’re in, with Santa’s mostly-clothed sex scene with two girls being (IMHO) the funniest scene in the whole movie. I also got a kick out of the scenes involving Hogan’s dealer, Nixon’s bathroom woes and the amusing twist on “the true meaning of Christmas” speeches found in many a Christmas special.

Although the film’s low budget is obvious, I was impressed with the well-made opening credits and how the video quality doesn’t scream “shot on a commercial grade mini-DV camera.” It’s refreshing to see a SOV filmmaker taking the extra effort to avoid that look. Even on the DVD-R, the clear, widescreen transfer looked great and did not suffer from any artifacting problems. Similarly, the audio was clear and distortion-free. Although not available on the screener, the actual release has special features including (but not limited to) two commentaries, behind-the-scenes videos and bloopers.

Although I think the film would have benefited from some changes in the script or being reedited into some short films, I think that a lot of my problems with the film stem from how I’m not really part of the target audience. The shout-out to “all the Juggalos and Juggalettes” for their support in the end credits made that pretty clear. So if you’re thinking of watching anything by Hack Movies, I recommend watching some of the videos at their official Youtube channel to see whether or not their particular brand of microbudget, politically incorrect stuff is your sort of thing.

Special thanks to Hack Movies for the review copy!

Bad Behavior has blocked 1642 access attempts in the last 7 days.