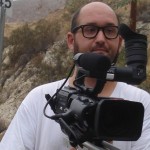 Caleb Emerson is an auteur the likes of Woody Allen, Orson Welles, Clint Eastwood and Ed Wood, contributing a renegade sense of style to his filmmaking endeavors. Either bringing a great underlying performance of character as an actor (CITIZEN TOXIE, SPLATTER DISCO, POULTRYGEIST)or commanding a renegade eye behind the camera (DIE YOU ZOMBIE BASTARDS! and the new FRANKIE IN BLUNDERLAND), Caleb Emerson is a gift to the modern cinema.

You can locate the official page for Caleb Emerson here, as well as his presence on Twitter.

How would you describe your current/most recent creative endeavor (ed: in this case, FRANKIE IN BLUNDERLAND) – is it a continuation of a previous aesthetic/idea or a radical change induced by a newly discovered influence?

Well…is some ways Frankie in Blunderland is similar to Die You Zombie Bastards! and in a lot of ways it’s very different. First, the similarities: They both center around a very non traditional protagonist who is on a quest to rescue their kidnapped wife. IN DYZB!, Red is a goofy serial killer whose goofy cannibal wife, Violet, is kidnapped by a mad scientist. He sets out on a quest to find her and encounters all sorts of obstacles and monsters along the way who he has to fight.

In FIB, Frankie is a sad sack loser who lets the world walk all over him. His hateful bitch of a wife, Katie is kidnapped (twice) by his asshole best friend Tommy and Frankie sets out on a quest to find her (even though the LAST thing she wants is to be found). Along the way he encounters a bunch of weirdos and obstacles that he must deal with. Both films are sore of set in another world. It’s earth…but the real rules of every day life don’t necessarily apply. They’re both surreal and at times perverse and ridiculous.

But the biggest difference is that I think the characters in Frankie in Blunderland are much more human. There are a lot of real life feelings and emotions that you can (or at least I could) relate to. They’re mostly very unpleasant feelings…but they’re based in a lot of what I can only assume is real life experience. You’d have to ask the screenwriter, Marta Estirado about how much of that is true…but sadly, she passed away last year shortly after I shot the film.

So I guess DYZB! is more of a straight fantasy, where the fantasy in Frankie is more psychological fantasy or perhaps mental illness/unrest.  Strangely, DYZB! is much more of a gleeful film and it was made during a less happy time in my life, while Frankie is pretty dark and unhappy and things are going pretty well for me at the moment. That part I can’t explain. The tone I was going for in Frankie in Blunderland was “Combat Shock” meets “Repo Man”, neither of which are new influences…they’re just what I thought of when I read Marta’s script.

After being transported back in time (by a Wizard, naturally,) you take up your living as a barbarian warlord. What is the name that inspires fear in all your enemies and sends their children crying out in the night?

What was the least romantic activity you once participated in while on a date?

I’ve always been interested in true crime stories and I go around and visit locations where horrible people did horrible things. I can’t explain it, it’s just always been a fascination since I was a kid. I spent a lot of time in LA in 2004 while DYZB! was being edited and while i was there I started becoming obsessed with the Masnon case. I had always been interested, but being in the place where it happened sparked something in me. Daniel Strange was editing the film and every couple of months  I came out to LA for a long weekend to work on it with him and every trip I would  pick one spot to go and visit because I would always wake up really early because of the time change. I never made it out to Spahn Ranch though, which was one of the spots I really wanted to see.

Anyway, the following year I came out for a week or so (the movie was already finished and i wanted to come to LA and actually get to enjoy the city) with my girlfriend. So, on Valentines day 2005, she and I sent the day hiking into the spot that used to be Spahn Ranch. There’s the main part that you can just walk onto from the street, but I wanted to see the depths so we did a 2 hour hike in from behind.

We got covered with ticks that were the size of M&Ms, stumbled on a dead rattlesnake, were followed by a loud, angry hawk and kept finding mountain lion tracks…just so I could see where the Manson family used to live 35 years earlier. I had an amazing time, but most people would find that an incredibly unromantic date. Apparently my girlfriend didn’t cause she married me 2 years later.

What’s a movie that you love that virtually no one knows about?

Well…I loved “Thundercrack”. Lots of people don’t know about that one.  I also really love “Reflections of Evil”. I recently found out that Damon Packard, the guy that made that movie lives not far from me and I’ve been helping him with his new movie “Foxfur” which I’m very happy to be involved with. He also edited the opening title sequence of “Frankie in Blunderland” and he’s in it playing the Convenience Store Clerk. I’m sure people who are into underground and cult movies will be well aware of both of those films, but I think they go pretty undetected by the general public.

If you could name a drink after you (ed: “the Caleb Emerson”), what would it be, ingredient-wise?

I’m not much of a drinker, so probably Turkish Coffee. The ingredients are coffee and water.