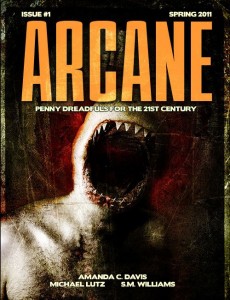 Madness would be a primary motivation for anyone looking to involve him or herself in the current day magazine industry, with subscriptions dying and print costs rising. Madness, I might then assume, guides the hand that created ARCANE, a new magazine that identifies itself as “penny dreadfuls for the 21st Century.”  However, the man helming the magazine is well versed in madness, so I am confident that in its existence, ARCANE will be an influential and highly enjoyable publication.

ARCANE’s editor is Nathan Shumate, creator of the late ARKHAM TALES that ventured into electronic distribution. With publisher Sandy Petersen, Shumate comes to this world more primed with eReaders, of kindles and nooks, with experience and a good sense of what can and cannot succeed in this perilous publication landscape. At $2.99, the electronic version of ARCANE #1, currently available, offers up twelve tales of terror at what you’d pay for two liters of brand name soda these days. For those of us who prefer the paper copy, a print copy is available for $7.99.

As electronic readers rise in sales and viable business models emerge in this new field, it’s going to be the way for writers to get their stuff read, let alone sold. Four months ago, the news broke that Amanda Hocking, a twenty-six year old writer, was a millionaire by using Amazon and its Kindle. Her fiction in recent favor: of the books she’s written, there is a vampire romance series and a self-discovery in an urban fantasy trilogy.  She made a cool two million before scoring a publishing contract with St. Marten’s press.

ARCANE, I think, looks to duplicate Hocking’s success. Normal literary journals like this run up in the 8-15 dollar range. The print version is the cheapest I’ve seen. Normal monster magazines are going to set you back ten bucks. So here’s a chance for you, dear consumer, to get your horror for cheap and immediately; it seems to me like a sensible deal (if not a clever lure for that impulse buy.)

Electronically, I would purchase this for three dollars. I would not be so quick to be parted from my money at the eight dollar price, even though it’s the same magazine full of the same stories. It’s not a concept of quality, but more that my impulse to purchase a magazine I am unfamiliar with is greater at a reduced risk. Why? I think at that lowered price for an electronic copy, both the money and the product retain a immaterial concept, a thought of “unrealness.” This might ultimately lead to disaster, but if the moment, new writers are given a chance to circumvent outdated methods that prevent them from being heard, I’m all for it.

The first of the quarterly magazine, ARCANE #1 provides twelve diverse tales with a similar take on the genre of horror fiction. Instead of capitalizing on the ‘splatterpunk’ ethos of gore and attitude, the stories of ARCANE are described as using “foreshadowing and dread” to build a creeping terror, a tribute to the old weird tales that influenced Shumate. Like minded writers and readers will find ARCANE to be delightfully twisted.

The tales “In The Place Where the Tree Falleth” by Michael Lutz and “The Mine” by Jason V. Shayer would fit in with the Blackwoods, Smiths and Lovecrafts. Both of those stories occur in a past setting, where “Hazards” by Justin Pollock takes a similar sense of terror in a modern world.

Humor is well represented with Jeff Cook’s “Darnell Behind Glass” and “Dear Management” by Tom Wortman. Each story has its horrific elements but the stories are written to reflect both Wortman and Cook’s individual dark humor.

Probably the most visceral of all stories in this issue is Stephen Hill’s “Laundry Night”, whose depictions of the story’s central antagonist were strong enough to give me a shudder.

S.M. Williams’ “Ricky and the Elder Gods” contains similar creepy crawlies, but with more action. It is an enjoyable read though I suspect it’s more of an introduction to a greater world of Williams’ creation.  I think that in the future, Williams will point back to this issue as the start of a future novel.  Similarly, the characters of Amanda C. Davis’s “Courting The Queen of Sheba” could power a whole short story collection.

Committing to diversity, ARCANE includes some fantasy elements in stories like Jaelith Ingold’s dark reimagining of the Hansel and Gretel fairy tale in “Gingerbread and Ashes” as well as William Knight’s dreamy conjuring of the tale, “A Requiem for Tarsenesia.” Each retains a creeping dread or terror and neither seems to be a placeholder or token; each stands shoulder to shoulder with the other stories in this issue.

There are some abstract, dementedly surreal pieces. “Hello Operator” by Donny Waagen is a very strange piece that warrants more than one reading to fully understand the subtle horror. Similarly, “The Hole” by Rob Errera is a slow burn, a story who aims to hint at the horror so it lingers in the corner of your eye long after you finish reading.

The short story is a hard dance to get perfect and every finished product is, in its own, a success. ARCANE has composed its first issue full of distinct and different voices, each offering a new take on the subject of horror, a different flavor of fear. I look forward to the second issue and would recommend it to anyone. It’s a collection of horror stories from contemporary voices. With such a artful eye selecting a talented variety, you’ll definitely find something to enjoy.

Big thanks to Blackgate, whose interview with Nathan Shumate provided the information in this piece.

Bad Behavior has blocked 742 access attempts in the last 7 days.