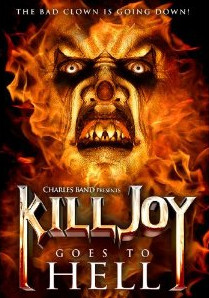 To say that Killjoy has had better days would be an understatement. Accused of failing his last mission, the demonic clown has been dragged to the depths of Hell to stand trial. With each successful charge, Killjoy loses one of his many aliases. If found guilty, he’ll loose them all and be erased from existence! Since the prosecutor and Killjoy’s lawyer both have agendas of their own, Killjoy’s posse has to scramble to rescue their boss. But since their only hope is the survivor of Killjoy’s last massacre and they’re stuck in Hell, things are going to get interesting…

From the above description, you might think Killjoy Goes To Hell is one of those faux sequels made from a few sequences of original footage built around lengthy excerpts of stock footage. I can thankfully say this movie is not the Puppet Master: The Legacy of the Killjoy franchise. In fact, the only time stock footage is presented is in a single sequence where said footage is sped up to visually represent a character’s testimony. Instead, the film jumps between the characters in Hell and the survivor of the last film’s time in an asylum (where they are being questioned by detectives trying to locate the bodies of the victims from Killjoy 3), usually at the point where a character would have to recount the events of the last film.

The film itself is a mixed bag. Trent Haaga does his best with the limited material, I just didn’t find it up to his usual standards. I will admit the elevator sequence at the beginning cracked me up, though. Although there’s a ton of obvious computer-generated special effects, some of the concepts are admittedly interesting. Who would have thought that Hell is actually a floating island/prison ship combo? Sadly, the imagination shown in said effects peters out when it comes down to the actual writing. The clown rebellion subplot is underdeveloped and there are several plot holes. Although the court’s revulsion to Killjoy admitting to having sought out consensual sex was hilarious, it doesn’t make sense considering how no issue is made out all for his similar relationships with his demonic lovers (and you had better believe they come up in the movie). Hell, the very mission that Killjoy is on trial for was actually successful if you go back and pay attention to the previous film’s plot! There are also scenes of Freakshow and Batty Boop attacking people and seemingly drinking some of their blood. Originally, I had assumed they were doing this to get enough material to summon up a character to testify on Killjoy’s behalf, but that didn’t turn out to be the case and their blood drinking is never referred to again. While I don’t love Killjoy Goes To Hell, I don’t hate it either. Let’s just say that prefer it to The Dead Want Women but find it inferior to Killjoy 3.

Killjoy Goes To Hell clocks in at about 93 minutes (factoring in the credits, that is) and each second of it both looks and sounds great due to the crystal clear A/V quality of the widescreen transfer. As is often the case for Full Moon release, the DVD has chapter stops but no chapter selection menu of any kind. The special features consist of a short “Making Of” featurette and several trailers. Said featurette is about 6 1/2 minutes long and features a nice mix of stock footage from the film mixed in with behind-the-scenes footage and interviews with the actors. The usually enigmatic actor who plays Freakshow gets a nice segment where he explains his character and some of the special effects and the actor portraying the asylum’s doctor gets to reveal that he usually produces Full Moon movies rather than act in them. Trent Haaga briefly appears in costume (and in character), proving yet again that he needs the opportunity to improvise more in the Killjoy films.

The “Remastered Trailers” lack a “Play all” option and consist of previews for Puppet Master, Puppet Master 2, Puppet Master 3, Castle Freak, Zombies vs. Strippers, Killjoy Goes To Hell, and Killjoy’s Revenge (along with a promo for the Full Moon Grindhouse Collection and a teaser for the upcoming Reel Evil). The “remastered” part refers to how the trailers for the first few vintage Full Moon titles appear to combine widescreen remastered footage with the original, unrestored audio from the original trailers. The rest of the trailers are also widescreen and the quality is what you’d expect from movies that were made within the last few years. I should note that the trailer for Killjoy’s Revenge and the “Grindhouse Promo” are the same ones described in the linked reviews. It should also be noted that the DVD starts with a fullscreen trailer for Puppet Master: Axis Rising that features clips of all the characters from the franchise (with a mixed bag of visual quality).

Instead of repeating myself as to how I felt about this particular movie, I’d like to close this review with my interest in the film Reel Evil. Although the found footage genre has been played out the in world of horror, the teaser included on this DVD is extremely promising. If Full Moon can keep the high level of quality demonstrated in it up throughout the rest of the film’s story of videos found at the scene of mysterious disappearances, they’ll definitely have a hit on their hands.

Bad Behavior has blocked 1343 access attempts in the last 7 days.