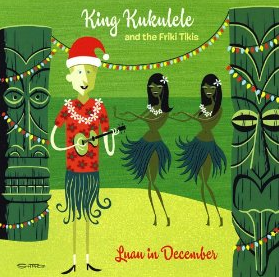 Even if you’ve never heard one of their albums before, chances are that you’re already aware of King Kukulele and the Friki Tikis. Although active for quite some time on the West Coast, King Kukulele officially made his presence known to the rest of the country at the Hukilau in 2002. The following year, his Tiki Palace made quite a splash online and has been hosting the Tiki Tot Tour at Tiki Oasis in recent years. But who are they? The members of King Kukulele and the Friki Tikis consist of:

Although their self-titled 2004 release was their first CD, 2008’s Luau in December is (as of this writing) their most widely available album. Although the concept may seem kind of odd at first, it actually makes perfect sense. Exotica music takes its listeners on relaxing journeys to faraway places, which is perfect for combating holiday stress and the cold weather blues. In addition to original songs, there are also several exotica versions of Christmas classics. From what I can tell, this album seems to be the first exotica Christmas album of the modern era!

“Luau In December” tells us to trade our eggnog for Mai Tais in this lively, but somehow mellow, tune. King Kukulele’s pleasant voice is well-teamed with the marimba, percussion and steel guitar percussion. A child singing about a greedy young boy’s Christmas expectations in “Brand New Ukulele,” but Kukulele takes over to tell us of the one special gift that changed the lad’s attitude as the extremely catchy backing music picks up. I’m not kidding about it being catchy, either. I can practically guarantee that you’ll catch yourself singing this for days after hearing it. “Santa’s Menehune” deals with a legendary Hawaiian creature that is claimed to have amazing building skills. Naturally, this comes into play when he goes to visit his elven cousin at the North Pole. It’s a cute song thanks to its Chimpmunk-style voices and amusing appearance by “Elf-vis.” The late, great “Duke of Uke” himself, Bill “Tappy” Tapia takes over the singing and ukelele duties for “Tappy Claus.” Backed by a steel guitar, Tappy denies being Santa Claus and recounts his constant bad luck with gifts over the years. It’s a real treat to hear the legend in action and although the song’s reference to over 100 years of bad gifts might seem like a joke, he actually had reached that age at the time the song was recorded! In “Christmas Luau,” the ukelele and steel guitar nicely back this musical tale of a Hawaiian Christmas (which also foreshadows the next track). Those learning about various Hawaiian terms will find this song especially invaluable in their studies. Just don’t listen to it while you’re hungry. Trust me on this.

“The Night Before Christmas” combines sleigh bells and vibraphone work as special guest Laura Thatcher joins King Kukulele in singing this holiday classic while the heavy introduction of “You’re a Mean One, Mr. Grinch” leads to the marimba getting quite a workout with some great ukelele and steel guitar work. “I Work for Santa Claus” has a surprisingly Latin-esque feel thanks to its use of a guitarrón. In it, an elf sings about his job duties and the incredibly chain of mishaps that occurred the night Blitzen lost one of his hors…er…reindeer shoes. There’s also a very welcome reference to the Krampus. What’s not to love? While many traditional exotica songs combine music and animal noises, “Santa’s Workshop” couples vibes and percussion with the sounds of toys being made. This gives the song about toy building an appropriately soft and magic feel. The Friki Tikis’ take on the Yule standard “Rudolph the Red Nosed Reindeer” features incredible drum work here, along with a wonderful instrumental interlude with a steel guitar and marimba. “Reindeer Holiday” is a charming ukelele tune about Santa’s reindeer and their unscheduled Hawaiian vacation, which has a closing vocal harmony segment that is not to be missed. The Tiki rock take on “Hooray for Santa Claus” is simply amazing and is easily one of my most favorite tracks from the album. If you’ve ever cringed whenever the original version of this song played in Santa Claus Conquers the Martians, you need to hear this version. Yesterday. “Thirty-Two Feet and Eight Little Tails” is a peppy musical tribute to the eight tiny reindeer pulling ol’ St. Nick’s sleigh, complete with a great vibraphone lead out. “Mele Kalikimaka” is Hawaiian for “Merry Christmas.” It’s also the name of the album’s final track, which is both faithful to the original version while providing enough of its own distinctive touches to make it feel like more than “just a cover.” Like any good holiday special, this track features plenty of guest performers. Joe Moe (who previously appeared on the album as the lead vocals for “Christmas Luau”) provides the harmony vocals while Ali Lexa handles the lead ukelele duties.

Luau In December will be enjoyed by people of all ages (especially fans of SpongeBob SquarePants) and is a highly recommended purchase. It’s also proof positive how something that’s “family friendly” doesn’t necessarily have be sappy or talk down to its listeners. I, for one, am eagerly awaiting what King Kukulele and the Friki Tikis have to bring us in the future. If it’s anything like this album, then we’re all in for a real treat.

Special thanks to Friki Tiki Records for the review copy!