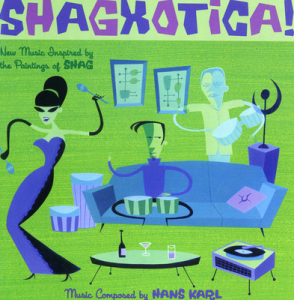 The works of Josh “Shag!” Agle have an undeniable place in the world of Tiki culture (and vice versa). But for some reason, that only seems to apply to the art of Tiki and not the music. While it is true that Shag has designed covers for several exotica albums, very little music is actually devoted to his works. Thankfully, film composer Hans Karl noticed this and quickly went about correcting this oversight. And thus Shagxotica! was born!

The concept of the album is simple: Karl has created 15 tracks inspired by 15 different paintings by Mr. Agle, which are included with the 20 page booklet included with the album. Naturally, the title of each track (save for the introduction) refers to the painting that spawned it. Think Vincent Price Presents Great Paintings and you’ll have a pretty good idea of what the CD is like (only even more awesome).

Although only 37 seconds long, “Welcome To The World Of Shag” packs in a LOT of musical goodness. Crashing gongs usher in dreamy vocals and exotic percussion. Are there bird calls and animal howls? You bet! Those effects also play a big role in “The Ghost of Augie Colon,” which is appropriate given Mr. Colon’s having provided such sounds in many classic exotica albums (and whose legacy still continues today). In this case, guest performer Jay Stewart provides the calls (along with some trumpet, guitar and vocal work on some of the other tracks). There’s also plenty of fantastic percussion, horns and piano work. “The Uninvited Guests” has a sneaky feel thanks to its use of chimes and drums. “The Incredible Cargo” offers spacy percussion, touches of horns, animal calls and instruments I can’t even identify while “Shiva A Go-Go” goes into space age pop territory and has some great guitar work. The short track “Dr. Scorpio’s Lair” is a menacing spy villain theme with lots of drums and intrigue. In contrast, the vaguely “Middle Eastern”-sounding “Crandall Meets His Match” is quite light hearted. “Lunchtime At The Bishop Museum” is somewhat more subdued than the previous track. Notice I said “somewhat,” as there’s lots of cartoon “boing” sound effects and someone singing in a foreign language.

“The Golden Frame” has a mysterious feel and “Jungle Story” is the perfect theme for a safari in your mind. It has a great dreamlike opening and its habit of getting somewhat spacey at times brings this track solidly into the world of neo-exotica. The percussion and piano work of “The Torrid Holiday” has a slow and steady pace while the moody sax work of “The Three Enablers” goes down smooth like a Mai Tai. Although more energetic than last track (and full of space sound effects), “Yellow Bird” is still pretty relaxed in tone. Both “Watermelon Man” and “Blue Scooter” are quite jazzy, with “Watermelon Man” utilizing a bass drum and trumpets to great effect while “Blue Scooter” masterfully combines drums and piano. The final track is a lengthy twofer, which couples “Thank You For Visiting The World of Shag” with a hidden track called The Effects Of Space Radiation On Man-In-The-Moon Marriages.” The first part echos the wild feel of album’s opening track while the second is gloriously bizarre and easily sticks in your head. Between the music and all the sci-fi sound effects, it’s impossible to ignore (or forget) it!

Speaking of impossible, it’s almost impossible to precisely pinpoint the album’s style. It does fall into neo-exotica category but at the same time has a sound that’s very unique. At Hans Karl’s official CD Baby page, there’s a note on how he feels that Shag’s work has a “retro-future” feel to it and, with that in mind, he sought to create tracks that could “…play in a cool lounge bar circa 1963 or 2063.” It also notes that he’s no stranger to exotica music or Tiki culture, having grown up being exposed to it by his parents, so you know this project was in good hands. I think it’s best to say that this music is like Shag’s art: It is more than just “Tiki” and covers a variety of genres (although there would be nothing wrong with either if they were “just” Tiki-related). Both horror and Tiki fans will find plenty to love in both the music and the artwork that inspired it. Given the high cost of full-sized coffee table books devoted to Shag’s work, the CD’s album/booklet combination is a great deal for those seeking more of Mr. Agle’s work in their lives. Hell, it’s a great deal even if you already own some of his art. No matter what category you fall in, I’m sure we’re all in agreement in hoping Hans Karl will take us all back to the world of Shag! sometime.

Special thanks to Hans Karl for use of the image!

Bad Behavior has blocked 824 access attempts in the last 7 days.