Cybernetic Ghost of Chanukkah Past from the Future 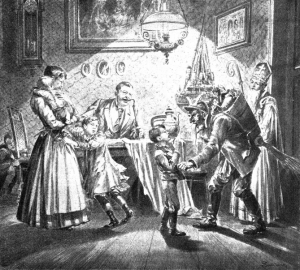 Many of you probably know of the Krampus from its appearance on The Venture Bros. Christmas special. For those that don’t, I’ll explain:

The Krampus is a type of legendary creature (some accounts claim it’s a type of incubus) that is said to act as a companion or counterpart to Saint Nicholas (aka Santa Claus) during his travels to the Alpine regions of Europe. Instead of being a jolly elf like one might expect to travel with Santa, the Krampus is large hairy monster with massive horns, sharp fangs, and cloven hooves. “Krampus” is derived from “Krampen,” the Old High German word for “claw.” That’s right, “Santa Claws”-style jokes are nothing new. Whereas St. Nicholas would give out presents to well-behaved children, the Krampus would punish naughty boys and girls by beating them with a birch rod. Sometimes the Krampus would even steal away children in the large sack he carries around; a kind of bizarro version of Saint Nicholas bringing and leaving presents from his sack! The threat of being given coal on Christmas for being bad seems quite desirable in comparison to being throttled and carried away by a horrible monster for who-knows-what.

But the Krampus tradition involves much more than spooky stories and threats to make children behave. Chase’s calendar of events 2009 notes that in countries where the tradition is celebrated, many young men will dress up as Krampuses (Krampi?) and roam the area to scare people and swat at them with sticks. Their costumes are made from various types of fur, hair, or rags topped off with masterfully-carved wooden masks. It is also not unusual for them to carry warning bells or clanking chains as well. Thanks to the magic of Youtube, we can see this tradition in action:

The Wikipedia entry on the Krampus, my source for several of the above facts, has a wonderful gallery of Krampus costume pictures that I encourage you to visit.

There are also other European Christmas traditions involving Krampus-like beings who give out punishments (and sometimes gifts) to children during the Yuletide season, ranging from hairy beings of varying temperament to shabbily-dressed older men.

Although Italy has a tradition involving a hairy creature, it isn’t all that comparable to the Krampus since the Badalisc is a good creature that is captured by townspeople and forced to tell gossip. The only similarities are the furry nature of the beasts and the “person in a costume” aspect of both traditions.

In short, Europeans have way cooler Christmas traditions than Americans do. Well, except for the variations on the “Black Peter” companion, whose sooty face and hands are uncomfortably close to racism and blackface…