Today I opened up a latex “specimen” that I bottled up in June of last year. Why? To test the effects of time on both the bottle seal and the critter inside.

The seal, consisting of an internal and external layer of silicone for the lid and a coating of melted wax, was in absolutely pristine condition. It took a considerable amount of force to break the wax away, so I think it’s safe to say it won’t flake off under normal use. The lid wasn’t quite so easy. There was some minor movement when I tried to twist it off, but the seal didn’t break until I cut the silicone along the entire circumference with an X-Acto blade. Once that was done the top came off with only minor resistance.

Here’s the specimen right after it was decanted. 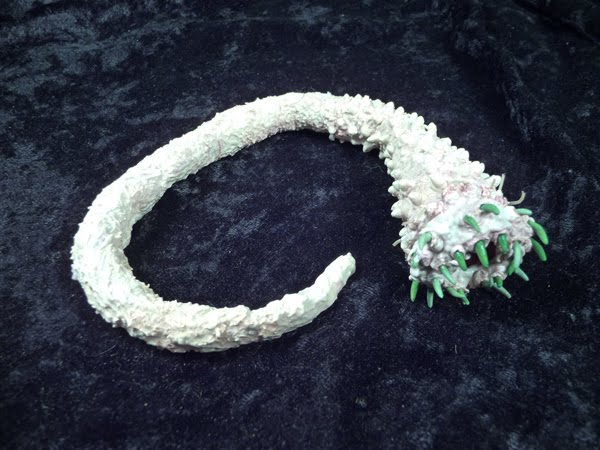 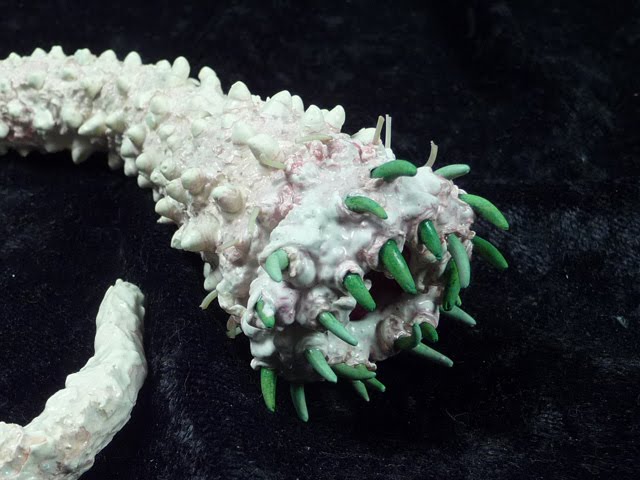 The latex is fully intact, but it has absorbed some of the fluid and swelled up. Not surprisingly, the thickest latex bits, particularly the “horns” along the body, are the ones that have grown the most. At a guess I’d say they’re 30 percent larger than in their pristine state.

Outside of that the latex is in tip-top shape. The fluid was a 90/10 mixture of distilled water and glycerin with a few grains of potassium metabisulfite to sterilize the contents, so there shouldn’t have been anything for the latex to react with. Without bacterial action or UV light the latex should be stable for years.

The teeth are the real surprise. They were sculpted from Apoxie Sculpt, and they’ve obviously absorbed the green dye used to tint the preservative fluid. That seems odd given the resistance of epoxy resin to most chemical attacks. It’s not a bad effect, just not something I expected.

I’ll have some more pictures tonight once the specimen has had a chance to dry.

Bad Behavior has blocked 1001 access attempts in the last 7 days.