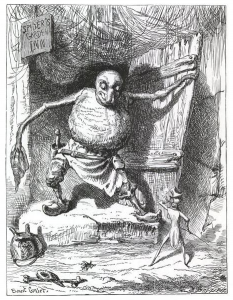 An illustration of the classic children’s poem “The Spider and the Fly” made quite an impression on Reggie Oliver when he was younger. But it wasn’t a good one, seeing as how his mother had to destroy it after it gave him so many nightmares. He confronted this bit of childhood trauma years later by writing “Come Into My Parlour.” I managed to find the image which started it all and it’s interesting to see how his memory made it much more disturbing when he described it in the story. Somehow I think this helps make the story’s antagonist that much more sinister. Hopefully you’ll feel the same way. I also hope you won’t have the issues I’ve been having with Google Books suddenly not displaying parts of the story. But I do have a solution if you do. Just press the next page button a few times and then push the previous page button a few times. You might have to do it more than once, but it will eventually reveal the previous unavailable pages.

Although best known for his scary stories for children and young adults, Goosebumps scribe R.L. Stine has also written horror fiction aimed at older readers. Here’s one such example called “Welcome to the Club.”

Although I have already shared one of John M. Cozzoli’s stories in a previous installment, I now want to share something which lets him truly show his talent. So with that in mind, here’s “Tommy Boy.” Like many of the stories in this post, this contains cursing and subjects not suited for younger readers.

If that doesn’t have enough zombies for you, then check out “The Hunched Monkey: A Zombiefest Beginning” by Eddie Jose Morales.

Wait a second. Have I ever shared any werewolf stories here before? I’ll correct this oversight by sharing Michael Marshall Smith’s “Rain Falls” and Hector Hugh Munro’s “Gabriel-Ernest.” You might remember Mr. Munro better as “Saki” from the last time I shared one of his stories.

Eric D. Cota might be better known around here for his horror audio productions, but he’s just as comfortable with the written word. So let’s head over to his website to enjoy some “Tasty Scraps.”

Clarence Aaron Robbins (better known as “the guy who wrote the stories that inspired the movies The Unholy Three and Freaks or “Tod Robbins”) wrote a novella called “Mysterious Martin” in 1912. He expanded and revised it in 1920 as “For Art’s Sake” and released his final version as “The Master of Murder” in 1933. I was able to track down the “For Art’s Sake” edition and I highly recommend reading it. Not only is it the earliest example of the “person has to kill in order to create masterful works of art” plot I’ve ever seen, but it also features a book which compels people to commit murder. But it only has that effect on the reader if they have a certain level of education!

The TV special Ghostwatch is infamous for never getting rebroadcast in its country of origin due to the reaction to its initial airing. So you know you’re in for a treat when the original writer, Stephen Volk, decided to create a sequel in short story form called “31/10.” Other unique takes on tales involving the restless dead which should be of interest include “Hunger: A Confession” by Dale Bailey and “The Haunted Dragoon” by Sir Arthur Quiller-Couch.

Those who write Lovecraftian fiction seem to have a form of tunnel vision in their approach to Mythos beings. With all the lore about forbidden tomes and rituals, the fact Cthulhu and company are mostly just extraterrestrials is barely touched upon. But imagine if someone living in a world where Lovecraft’s tales are true only focused on the extraterrestrial nature of those beings. Pouring through books on alien encounters might help inform them about the Mi-Go and Elder Things, but their neglecting other sources would also make them blissfully ignorant of things like the existence of Deep Ones in Innsmouth. If this sounds like the sort of concept you would love to see explored, “Rules For Monsters” by Michael Minnis is just what you’re looking for.

Mark McLaughlin’s “A Beauty Treatment For Mrs. Hamogeorgakis,” Al Hewetson’s “…It…” and Michael Chabon’s “The God of Dark Laughter” are other interesting takes on Lovecraftian subjects, with Chabon’s tale also acting as a fresh new take on the subject of clowns in horror.

But H.P. Lovecraft was influenced by others just as much as others were influenced by him. His approach to ghouls owes much to the Edward Lucas White story “Amina.” You can easily see which part of it provided the most inspiration to Providence’s most celebrated horror author. Sadly you can also see where some of his more unfortunate attitudes were further fueled by. Many authors approached Lovecraft to help them get their work published in Weird Tales. But rather than just provide a rough story idea and let him ghostwrite the rest like most of Lovecraft’s clientele, Adolphe Danziger De Castro took a different approach. He took a story he had published years before called “The Automatic Executioner” and let Lovecraft rework it into “The Electric Executioner.” That link also includes his story “A Sacrifice To Science,” which Lovecraft changed from a boring slog of a read to an actual horror story called “Clarendon’s Last Test.” While “The Automatic Executioner” is at least worth looking at as a novelty, the other story can be safely skipped.

I had been trying to track down Gouverneur Morris’ “Back There In The Grass” for years and it’s great to finally know the name of that one really weird story I once read in Alfred Hitchcock Presents Stories for Late at Night. My hazy memory made me think it was about a living doll with a most unusual secret, but it turns out I was wrong and the story is even more bizarre than I remembered!

Let’s close things out with a real bedtime story! It’s the Grimm fairy tale favorite “The Story of the Youth Who Went Forth to Learn What Fear Was,” which is sometimes referred to as “The Boy Who Left Home to Find Out About the Shivers.” Pleasant screams!

Bad Behavior has blocked 2194 access attempts in the last 7 days.