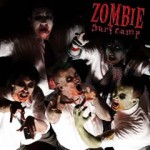 Can a vampire ever be a convincing lower-class dredge? There are many attempts to give the creature a grittier edge, though outside of a return to the inhuman version of NOSFERATU, the vampire will have a lot to overcome before it turns out to be something less-than-beautiful. Since the creature’s glorification has rendered it an aristocrat by nature, I think any efforts to marry the vampire with something like punk or working class has a handicap to overcome.

Punk as a music genre has always been closely associated with a contrarian perspective and not just a “No!” idea, but a “fuck no and fuck YOU” sentiment. It’s a sense of never being satisfied, being against everything and rejecting the current situation, whatever that is. Applied to a vampire, and the often result is a fangula being moody about once being human, turned vampire against his/her will, and hating the situation. Sort of half of INTERVIEW WITH A VAMPIRE or emo kids with teeth.

This is why Zombie Surf Camp works as an idea. “Zombie” is a less-than-desirable condition; outside an ‘Ugly Americans’ plotline, I can’t recall a recent example where green, decaying and flesh-hungry is a way to go through life.  It’s not a case of “Oh yeah! I’m a zombie!” but “Oh, no. I’m a zombie.”

ZSC is the combination of surf, punk, zombie and environmental consciousness. Folks might point out that surfing zombies aren’t new and point to both The Surf Zombies and various movies where the undead go underwater. What sets ZSC apart is that if a ZSC zombie were to ambush a beachgoer, they would devour the brains while disposing of the remains in the designated recycling bins.

If this has made ZSC sound like a joke, they’re not. The success of Zombie Surf Camp is that they’re not campy. The self-titled Surf Zombie Camp album is a great mixture of earnest surf and punk music, fusing the two elements together to make a fantastic album that stands on its own in either camp.

The band blends the elements together fluidly, so well that one neither overpowers the other. The punk doesn’t reduce the guitar work to a series of power chords, nor does the music lose its oomph when the guitar work resembles less RKL and more Dick Dale.

Zombie Surf Camp might be considered the mutation from exposing the skillful song styles of Shadowy Men On A Shadowy Planet to the radioactive punk wailing of Mr. Chi-Pig from SNFU (which are both Canadian bands, though ZSC originates from San Diego.)

It was a good decision to have “What’s Eating You?” open the album; if you were to ever use the word “conventional” to describe ZSC, “What’s Eating You? would be the closest as it resembles a conventional punk song – a great display of songwriting, the pairing of guitars and solid rhythm section to support the wild flowing of the vocals. If were to an alternative dimension where modern radio wasn’t completely horrible, I wouldn’t be surprised to hear “What’s Eating You?” between The Butthole Surfers and Beck.

“Flipper” flips (pun intended) the situation of ‘dolphin-free-tuna’ to ‘human-free-ocean.’ It’s the first of three songs that deal with the idea that harmful industrial pollution is going to literally “come and bite us on the ass,” as well as the arm, the neck and the brain. The band’s bio lists ZSC as a group of surfers who swam during a toxic spill from the San Onofre Nuclear Power Plant, something addressed in the song “Now, I Am A Zombie.”

Another diss of pollution comes in “Sewage,” which brings some humor the concept that the dead have come back and have started surf-punk bands. Moon Voggy’s vocal interactions with Resin A. Gain are played against some really choice surf riffs.

Voggy’s singing on the song is his bellowing wail, though he demonstrates a very regal voice on “Surf Zombies On Parade,” which a live performance is detailed as ‘Zombies on St. Patrick’s Day.’ The almost effortless switch between MC5’s Rob Tyner to Bobcat Goldthait is impressive.  Similar vocals can be found on “Midnight Sun.” the album’s quote-unquote ballad and “Remains.”The band kicks the punk up on “Culture of Life” and grinds a mean surf on “Corpse in a Barrel.”

This is a great album and will be a welcomed addition to your music library. But if you’re not convinced – Zombie Surf Camp has offered their first album for free. Head on over and you’ll find a torrent of Zombie Surf Camp available. 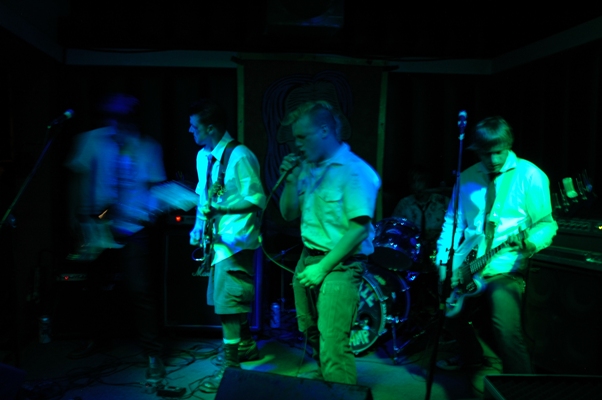