Guest Post: The Panic Beats, A DATE WITH DEATH

Today, we share another guest post from Kraig Khaos. Kraig has a reoccuring feature on 6ftplus – Killer Kuts from Kraig Khaos – where he shares a song from a vinyl recording. Kraig has a new podcast called Uncommon Interests, where he discusses a wide range of pop culture ranging from the mainstream to deep underground.

Editor’s Note: This post initially was published without crediting Kraig Khaos. It has been amended. 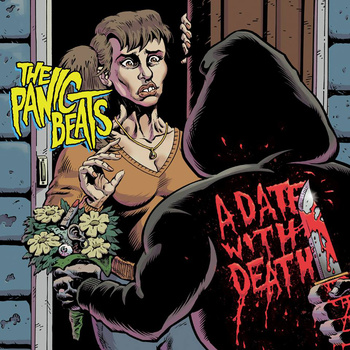 The Panic Beats returned this past Halloween season with a new full length album titled A Date With Death. Dale Van Thomme’s horror show of punk rock music has been kicking around for a few years now. And the new release really ups the ante.

As is with most Panic Beats albums, the songs on ‘A Date With Death’ are told through the eyes of a psychotic killer you’d find in an 80’s slasher film or an early 70’s giallo flick. So, lyrically, there is not too much new ground broken here. And some people might be put off or offended by the lyrics and see them as misogynistic; with song titles such as “Stalker,” “Love You To Death”, and “Dig Your Own Grave” and lyrics about kidnapping women and murder. But keep in mind, it’s all tongue in cheek and it IS, after all, called horror punk for a reason.

Where The Panic Beats really take off on this album is the music itself. They try a few new things and it totally works. If they stay on this track, I predict a long bloody career for this outfit. ‘A Date With Death’ utilizes harmonies, pitches and gang vocals that were previously RARELY, if ever, heard on previous albums. The guitar work and change ups are more complex and interesting as well. A lot of people refer to The Panic Beats sound as being akin to a Ramones sound with Misfits lyrics. And I think that’s kind of a cheap way out, because there is way more going on here.

The songs seem to stand out more and are more memorable on here than on most past albums. This is definitely The Panic Beats strongest outing to date.

The Panic Beats usually release most of their albums on vinyl; usually a limited edition colored run that usually sells out before I have a chance to buy it, and a black vinyl run. And it often comes with a poster that is different than the cover art of the album, but just as beautifully painted. Unfortunately, due to the labels that usually press The Panic Beats vinyl being over budget or way behind on their pressings in this economy, ‘A Date With Death’ has only thus far received only a digital and a CD release. As of this writing, there are only 3 CDs left. And for $5, it’s totally worth it.

So go on over to ThePanicBeats.Bandcamp.com and check it out. While you’re there you can also pick up a copy of their last release, Rest In Pieces on blood red cassette that has been released by cassette only horror label Graveyard Calling.

Bad Behavior has blocked 2154 access attempts in the last 7 days.