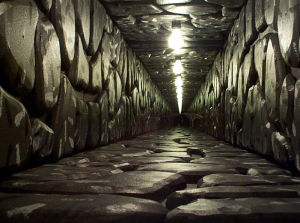 It’s difficult to pin down the exact date the bottomless pit illusion came into being, but it’s so easy to accomplish that it’s probably as old as mirrors themselves. I remember learning in history class how the famous Hall of Mirrors at the Palace of Versailles was arranged so that the room seemed to stretch out forever, so the basic effect goes back to at least 1678. And, yes, the fun house standard was indeed named after it. The effect has also been used in movies and novelty items. But despite the effect’s age, directions were next to impossible to find. That’s when Larry Lund entered the picture.

Disappointed by the lack of instructions on building on, Lund decided to step up the plate and create some. As was the case with the Trash Can Trauma, Lund’s posting of the plans online sparked a wave of bottomless pits appearing in haunted houses. In addition to the standard pit, people have created escape tunnels (even adding ladders), mineshafts, wells, portals to Hell and even outhouses! Other variants added monsters and scary surprises while others changed the materials used to construct the effect. Some played off Lund’s addition of a person calling for help by creating pits where the person calling for help was devoured by a monster! Others opted just to have the sounds of an unseen beast playing. But since we’re on the subject of variations on a design, let’s not forget the endless hallway variant of the illusion.

But what about a bottomless pit people can walk over? Surely the only way to accomplish that would be to use a detailed drawing, right? WRONG! Lund’s design can definitely be adapted to work in such a manner. Considering the sheer versatility of a bottomless pit, it’s totally understandable if you want to add one to your haunt or yard display (no matter which version you choose).

Special thanks to Larry Lund for use of the image!