Halloween with Frankie Stein and his Ghouls 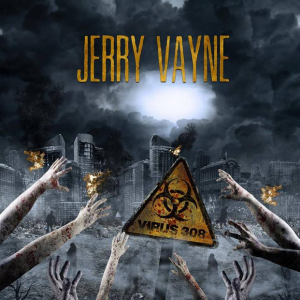 Although there are other artists out there that combine spooky soundtracks with rock music, Jerry Vayne is the only one I know of that actually has some rock credentials. In addition to his work as a solo artist, he’s played with groups like Den of Thieves, Foxxy Roxx, Psycho Gypsy and many more. As that last link will also show you, he first dipped his toes into the work of haunted ambient music with songs like “When Hinges Creak” and a cover of “The Headless Man” in 2006. But things really came together in 2008, when he was asked to contribute to the Rotting Flesh Radio compilation Dark Pandemonium. Response was so positive that he released Damnations Embrace the very next year. It wasn’t long before more albums and collaborations started appearing. Virus 308 is his most recent release and what I find interesting is how the tracks often have effects at start and finish in order to give the album a storyline of sorts.

With this in mind, “Emergency Broadcast” is a perfect start for the album. I love the stock music used for the “experiencing technical difficulties” message that’s interrupted by emergency broadcast system bulletin about virus outbreaks. They claim the situation is “under control,” but we know better. I recommend using this (and other tracks) out of sequence from the order they’re presented here. Rather than playing this at the start, set up a room in an abandoned house scene (more on that idea later) with an old radio placed across the room from a zombie. While guests are focused on the zombie, the radio can suddenly play this and startle them. Then, as they are distracted, either have the zombie attack or have a zombie burst out from under the table the radio was placed on. “Outbreak” features screaming crowds and sirens mixed with rockin’ guitars and although you can play this in a room designed to look like a desolated city that’s filled with zombies chasing people and crashed cars, but it also works if you play it softly behind a closed door as guests explore a military bunker in order to imply the state of the world outside. “Wasteland,” “Under Martial Law” and “Mandatory Quarantine” are also well-suited for use in the bunker section of your zombie haunt. The entrance for this portion of the attraction should have plenty of (fake) barbed wire and charred zombie remains nearby. Some military vehicles wouldn’t hurt, either. Hanging some zombie defense posters throughout the now-abandoned bunker would be a nice little touch. After a trip through a storage room, guests can take a secret elevator down to a laboratory where zombies are being experimented on. Among the still living body parts and dissected zombies are zombie test rats. It’s a shame they managed to break out of their cages to feast on hapless researchers. If you want to imply that government experimentation is the cause of the outbreak, be sure to throw some cyborg zombies into the mix as well.

The mix of rock music and a heart monitor in “Patient Zero” lets it work in both a zombie-themed haunt or a haunt’s hospital scene or crashed ambulance scene. Both “Virus 308” and “Spreading The Infection” are best suited for zombie scenes, while the pounding and heavy feel of “The Dead” makes it a good match for many types of scenes, even in a haunt that isn’t a “Haunted House of Rock.” Zombie hordes are heard amidst the rock for beginning of “Re-Animated,” which lets rock music take over until the end of the track (which features nothing but zombie sounds). It’s perfect for a room filled with seemingly static zombies. It could also work well in areas where zombies surprise visitors when they least expect it. If you want to explain the existence of such a room, simply send your patrons through an overrun house with boarded up windows (just watch out for that zombie hiding in a trash can). Inside is where people will have to dodge zombies reaching through walls and numerous unexpected zombie attacks throughout the house (including the basement). The title “Feast of the Flesh” makes the kind of scene it should be used in quite obvious. The unnerving ambiance and chilling (but energetic) rock of “Annihilation” make it a great fit for any scene, while the titles of “Mankind No More” and “Land Of The Undead” hint at what kinds of scenes they’d work best with.

You know, I never did finish that bunker idea I had earlier. Let’s fix that. NOW. Since the escape tunnel is blocked off, people will have to make a desperate escape through the sewers. Emerging in a swamp, they’ll have to dodge alligators and swamp monsters in addition to zombies (including ones in the water). Some of the zombies should have plants growing out of them to imply the origin of the swamp monsters, which can be created using the methods described at these sites. You might have noticed that none of my ideas involved a graveyard. I left that out given the virus-based origins of the albums’ zombies, but there’s no reason you can’t make one if you want to. After all, there’s plenty of prop ideas to be found online.

Virus 308 provides both listening pleasure and music to haunt by in one convenient package. The tracks are all well-timed for individual looping and the album can be easily adapted for your candy-dispensing needs come October 31st. On top of that, it also comes with a story of the same name by Sean Patrick Thompson and Jerry Vayne. If Thompson’s name sounds familiar to you, it might be because he had previously written a story to accompany Vayne’s Damnations Embrace album. Let’s not forget that it, like all of Vayne’s spooky ambient music, is available to haunters under a royalty free program! According to a recent Facebook update, Vayne is already working on a soundtrack for the Hundred Acres Manor haunted attraction, along with the standalone haunt album Bodies In The Bayou and a new album with the band Outta The Black! In other words, I don’t think this will be the only time I’ll be reviewing his work.

Special thanks to Jerry Vayne for the review copy!

Bad Behavior has blocked 3068 access attempts in the last 7 days.